Street Art in the north of Barcelona

Despite a crackdown on graffiti and street art following Franco’s death in 1975, freedom of expression and creativity have prevailed in Catalunya. In Barcelona, a protest culture is evident to this day. Locals regularly take to the streets, or even their balconies to loudly bang pots and pans, to call out any political doing they disagree with. Their voices are not only heard but seen on the streets as their responses inspire creativity that fill the walls of the city. This challenge visits locations in the creative areas of Gracia and Poble Nou, before heading to the outskirts of the inner city to see one of the icons of Barcelona’s street art. These areas all occupy the north and north west of the city, but are a little far a part. By taking the line 4 on the metro, the yellow line, you can easily fit all these sights into one day. Also for those who are keen to walk it is possible to travel between them on foot, and there is so much to see on the way. Doing this would take up a lot of your day if done at a leisurely pace, but you could pass the classic tourist spots of Sagrada Familia, Park Güell and Hospital Sant Pau on the way. 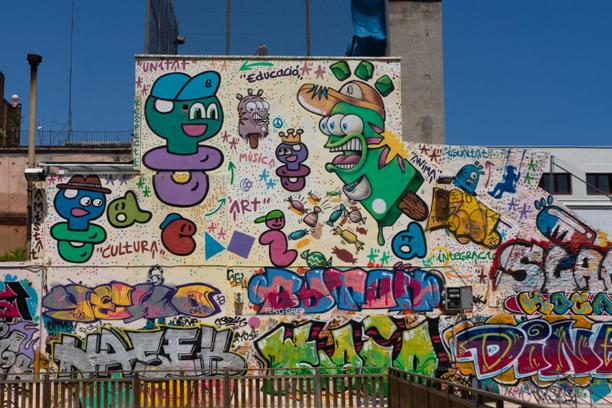 In the Poble Nou district of Barcelona, industrial wasteland is being repurposed making it the creative hub of the city. This area is a street-art fan’s treasure trail as it features older, more well-known pieces of art as well as constantly changing walls. A popular location for artists, you could spend hours wandering this area discovering different murals. To celebrate the spirit of Catalunya, I’ll direct you to one of the ‘Castellers’ by Spanish artist Gonzalo Borondo. A traditional activity of Catalunya, this is a sport that mixes climbing, balance and core strength in which large teams build free-standing human towers. Named Fer Lenya, the mural captures the moment the Castell falls. This piece of street art was made during the OpenWall Conference in 2015, a festival that opened the walls in the city to artists. Many local festivals incorporate a session of the Castellers so you might be lucky to catch a live version of this piece of art during your time in the city! 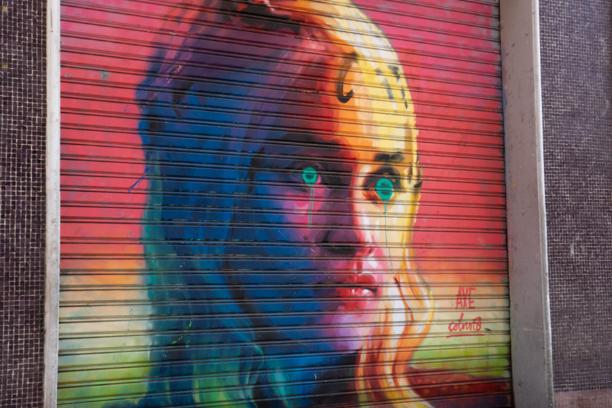 Since the inception of his trademark dummy in 1989, El Xupet Negre’s design has become one of the street art icons that pops up across the walls of much of the city. His logo draws influence from pop art and the artist’s own experience in advertising and graphic design. Outside of Barcelona, his design has appeared across Europe and the U.S.A. and he’s been recognised as one of the top 50 most influential street artists in the world. Gracia is a popular canvas for artists, this piece in particular was made in collaboration with two other renowned artists from the city: Konair and SM172, who worked on this project with Catalan Association of Integration and Human Development (ACIDH) and other local organisations to celebrate the culture of Gracia. Whilst some of the mural has now been covered by new graffiti, El Xupet Negre’s dummy manages to tower above the rest, out of reach from those painting on the wall below. 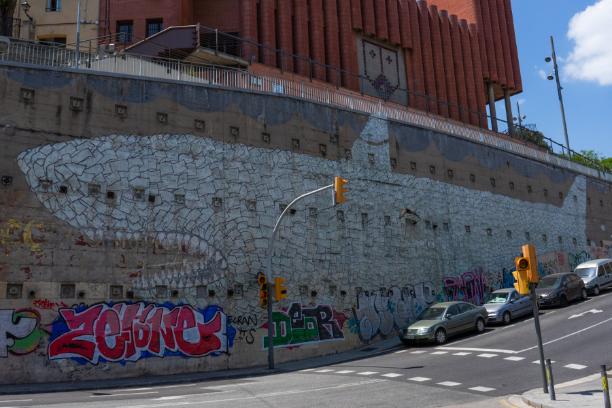 Located a bit outside of the city, visit the shark (El Tiburón) of Carmel on the way up to the Carmel Bunkers, which gives you incredible views across the city. This mural, like many you’ll see in Barcelona, has a street art festival to thank for giving it a home in the city; Italian artist Blu, often known as the Italian Banksy, painted it as part of the Influencers Street Art Festival in 2008. Constructed with 100€ notes rather than scales, the shark takes up an impressive 25m wall on Carrer del Santuari and looms over the city at the top of the hill of the working class neighborhood El Carmel. The artist intended this mural to be constant reminder of Spain’s political corruption, as well as response to the country’s financial crash in 2008. Now over ten years old, it’s a little faded but its message remains relevant. The shark has also become one of the most well-known pieces of street art in the city and often appears in television series and films.