Castles and towers of Paris

Dear friends. The classic image of the French Revolution that you have in mind is that of an angry people attacking a castle that belongs to carefree nobles. That's what you're going to do today: attack impregnable fortresses. I just hope you will do it with a smile on your face. But be careful, I will not let you visit ''classic'' castles. To vary the pleasures without spending your time on the train, since most of France's greatest castles are more than two hours away by car, I suggest you discover several types of castles: a medieval castle, a private castle, symbolic castles, and the king of castles. 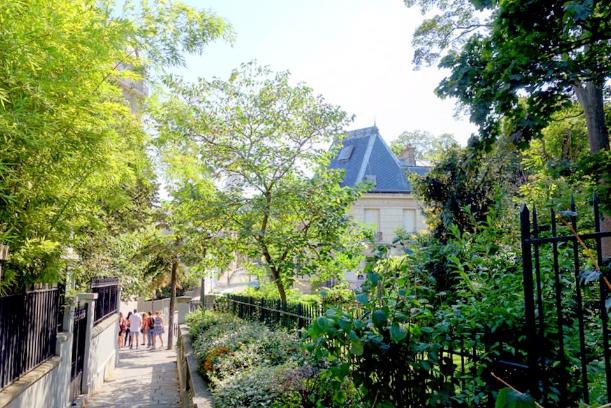 I suggest you start your challenge in the 18th arrondissement because the district and this castle in particular encapsulate all the spirit of Montmartre: the Château des Brouillards was built on agricultural land and you know that Montmartre was an agricultural area until the 19th century. It then attracted many artists and with them the political and intellectual elite of Paris. Finally, it almost disappeared and was saved by the new Parisian bourgeoisie, which unfortunately vanished its bohemian soul. This is somehow the story of Montmartre in a nutshell.

Let's go back now to the Château des Brouillards, literally the Palace of the Mists. It is a pleasure palace that is called ''folie'' (i.e. "craziness" in French), which was built on the hillock of Montmartre exactly where, according to the legend, Saint-Denis Bishop, at whom his head had been cut off, made a stop to wash his hands in a fountain. For the record, the saint man then continued his martyrdom towards the future city of Saint-Denis where the basilica bearing his name would eventually be built (see Challenge "Royal Paris"). If you look closely into the Suzanne-Buisson Square (a French political activist who died in Auschwitz), you will see a statue of a man, who could well be Saint Denis.

The history of this castle begins in 1772 when Montmartre was still not attached to Paris. A lawyer purchased a plot of land on rue des Brouillards on which there were vines and a mill called ''Moulin des brouillards'' because its operation produced a lot of water vapour in the morning. The mill was razed to the ground and part of the castle you see was built on the site.

The castle then experienced several lives. First, it served as a headquarters for several political associations. Then, it became home to and inspired several generations of writers and artists, such as Gérard de Nerval, Amedeo Modigliani, Max Jacob and Auguste Renoir. It is right in front of the castle, directly opposite the garden of the castle, at number 6, that his son, the filmmaker Jean Renoir, was born. Finally, the land is used as a place of entertainment and small traffic and is becoming obsolete. It was gradually abandoned, before being bought and restored in the 1920s by the Casadesus family of artists, who remained the owner until the turn of the 21st century. 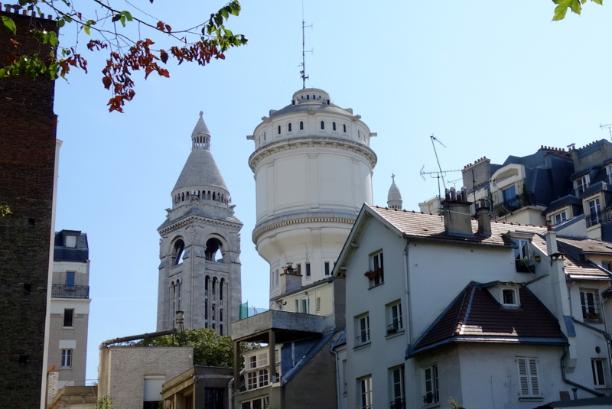 On the way off from the castle of the mists, you will notice the statue of Dalida, a famous French singer who committed suicide not far from there in the 1980s. If you wonder where exactly she ended her life, then go to Orchampt street, which is anyhow on the way to the next "castle". Then, continue in the direction of the basilica and look up. It is impossible to miss the Montmartre Water Castle.

I know that you have a thirst for knowledge and that is exactly why I propose that you come here. The Montmartre water tower served as a water reservoir for nearly a century when the city's population really began to increase. All the large reservoirs in Paris were built at high altitude, in order to provide water thanks to the principle of communicating vessels. Today, there are only five left and three of them in Paris: two in the East at Porte des Lilas and Ménilmontant (see Challenge "Singing Paris") and one in the South at Montsouris (see Challenge "Gallo-roman Paris").

The tower/castle was built in 1835 and operated until 1927. It used the water from the small river of the Dhuis, before the large reservoirs of Montmartre took charge of providing water to the inhabitants of the district. You will recognize these reservoirs very easily: they are right in front of the funicular and they were built in the same neo-Byzantine style as the basilica.

The Montmartre water tower has richly decorated octagonal shapes. The ground floor includes a small room, a bronze door, two pilasters and a niche topped by a shell vault with a marble table. Outside, you can see the Castle Fountain, which is unfortunately no longer in use today. As for the tower, it is occupied by an association that brings together wine specialists from Paris. In other words, the Parisians managed to turn water into wine! 🍷🍷 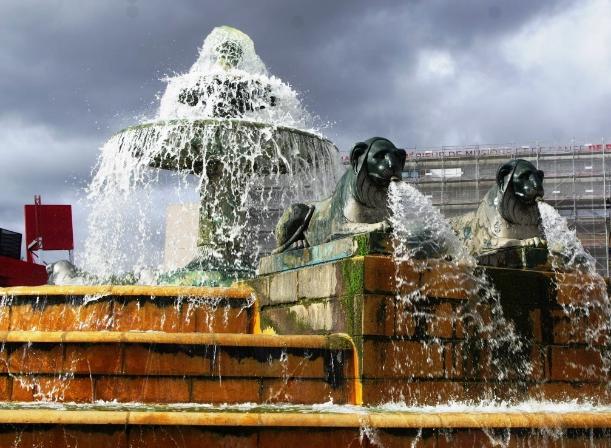 A fountain and a water tower again? Seriously ? Yes, it is a fountain, but it is more than that, I tell you. The fountain has two names as it is more commonly known as the "Nubian Lion Fountain". It was made of bronze and cast iron by the sculptor Girard in Napoleon's time to pay tribute to the Emperor's campaign in Egypt. As you may know, Napoleon was fascinated by lions, which became the symbol of his reign. Didn't he say that "if you build an army of 100 dogs and their leader is a lion, all dogs will fight like a lion"? But I digress. You are now in the 19th arrondissement, not far from the Cité des Sciences (see Challenge "Kids in Paris"), opposite the Grande Halle de la Villette where you can eat just very soon, unless you have already done so. This place was once called the Watering Place and the poor lions, at the time, had been charged with a much less glorious task than representing the Emperor, since they had to serve water to the thirsty cattle of the neighbouring slaughterhouse. What do these lions have to do with castles, you might rightly ask? Well, you should know that the fountain was once located on the Place de la République, opposite the famous diorama of Daguerre, a 19th century technology that offered, before the invention of cinema, several hundred people to admire moving images. Today's Place de la République was once called Place du Château d'Eau because of a fountain that was built there, which was the Girard fountain and which was called the Water Castle. Yeah, okay, it should be translated as Water Tower and not Castle. 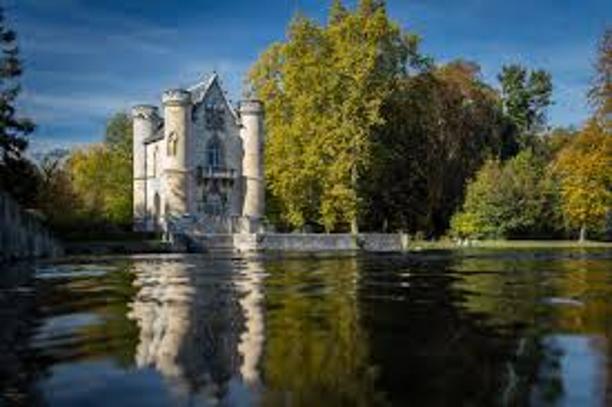 The castle of the queen Blanche

Let's get down to business now. No more water games and word games, I promise. When you arrive in the Gobelins district, named after the tapestry factory created in 1601 under Henri IV, you finally get closer to what you think is a French-style castle. It is a group of triangular-shaped buildings, the oldest of which dates back to the 13th century. It was first commissioned by Queen Marguerite de Provence, Saint Louis' widow (see again Challenge "Royal Paris") to be a mansion where she would retire until her death in 1295. A few years later, her daughter Blanche de France did the same after the passing of her husband, the Prince Ferdinand, called the Infant of Castile. The castle took its name and reference to the white colour from the 14th century, but not as a tribute to Blanche, but because French queens used to dress in white to mark their widowhood. The great works that will give the final form you know started one century later. The mansion was destroyed in 1404 and the whole place was abandoned. After a certain period of time, some industrialists, notably the Goblin family, decided to settle in that particular place because they needed the water of the small river of the Bièvre for their business. Yes indeed, another river flows to Paris, which you have never heard of, but unfortunately you will never see it since it has been almost entirely covered! Finally, other parts were added to the house and the factory between the end of the 15th century and the 18th century: a terrace, a couple of industrial buildings, a large main building with turrets, two floors with two spiral staircases and two cellar floors, a main courtyard and a coachman's passage and finally several other industrial premises including a tile factory and a tannery. How could you have learned of all this without me? You have now no excuse, it is time to visit the place. 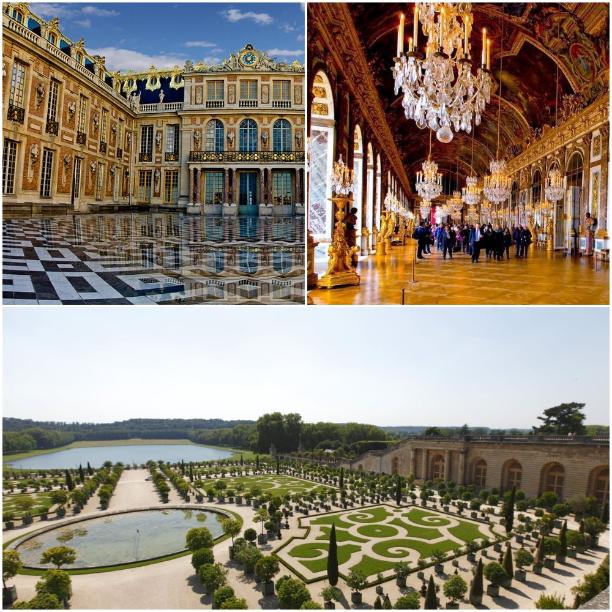 And now, Ladies and Gentlemen, the highlight of the challenge, the mythical Château de Versailles. How could it be otherwise? A challenge without Versailles is like getting out of a bakery without a baguette or taking the Parisian subway with big suitcases and not getting angry because of escalators under repair: it's simply unavoidable. Here you are now. What you have in front of you is simply a historic monument of global importance and the fifth most visited monument in the entire world. Here are some technical details to help you shine in society: Versailles covers more than 63,000 square meters, i.e. The equivalent of 6 to 12 football pitches. It has 2,300 rooms (Airbnb would be delighted to list it in its apartments in Paris) and the park covers 800 ha (it was ten times larger before the French Revolution). Just a little more patience and you can then go and visit the estate. You cannot visit the castle without knowing its history. I will make it short: it was first used as a hunting lodge for Louis XIII who was agoraphobic. It then underwent several changes under Louis XIII, Louis XIV and Louis XV and became the permanent residence of the kings of France between 1682 and 1789. The Revolution did not have much impact on the building itself and only the furniture was largely transferred to the Louvre Museum. What to visit in Versailles? The domain is composed of several parts, the Grand Canal, the Trianons, the park and the castle itself. So let's try a bit of everything, right? Inside, go and visit the Great Apartments (the King's Great Apartment and the Queen's Great Apartment) which communicate with each other via the Gallerie des Glaces (Hall of Mirrors). Outside, the Latone parterre, the Baths of Apollo and the orangery. A little further on, the Grand Trianon and the Petit Trianon (built on the site of an old village called Trianon). One day is not enough to visit Versailles, so don't be desparate if you fail to see everything I am suggesting. Next time you'll do better ! There you go, dear friends. It is time to leave but don't worry, Paris is only 16 km away. Now go and have a ''crêpe'' in the city centre of Versailles and accompany it with a typical glass of cider. Unless you prefer a bottle of...Château Laffitte? Just joking.