Cycle along the waterways of Paris

Did you know that Paris is a cycle-friendly city? Okay, it’s not Amsterdam, but the municipality has recently been working hard to make room for bicycles. Take the banks of the Seine river, for instance. Not so far ago, they were cluttered with automobiles. But in 2016, in a move that aroused the wrath of car drivers, the city mayor decided to give exclusive access to pedestrians and two-wheelers. And that’s fantastic news for the rider-explorer because Paris was built around its waterways!So, grab your vélib’ —the public bicycle sharing system of Paris, or any cycle from the ever-increasing local free-floating apps, and follow us along the canals and rivers of Paris. The itinerary starts at the Parc de la Villette, on the banks of the canal de l’Ourcq, continues over 6 kilometres along the Canal Saint-Martin ­—between the Bassin de la Villette and the Port de l’Arsenal, and ends with the view of the Eiffel Tower, on the Place du Trocadéro, after a scenic 7 kilometres ride along the Seine. You’ll get to see most of Paris in no more than 3 hours! 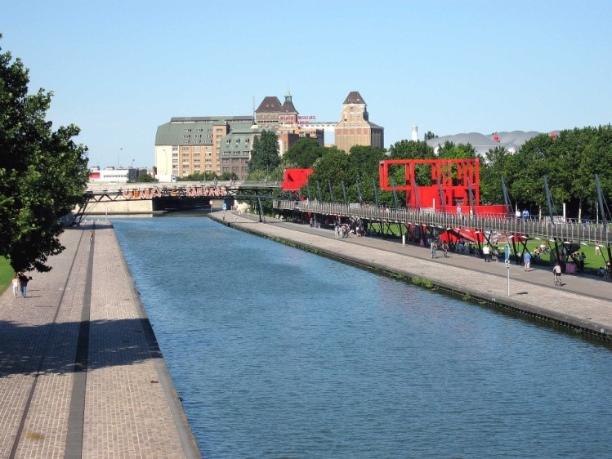 The Parc de la Villette is 550,000 square metres big, which makes it the largest green space in Paris. Grab a bicycle near the Grande Halle, an exhibition space that occasionally transforms as a festival venue. Take a ride around the park, towards the Cité des Sciences. Spot the submarine and gaze over the infamous Géode, a huge metallic ball. If you like postmodern architecture, you’ll be thrilled to chance upon these weird-looking shapes and colours. The most-hyped French architects like Christian de Portzamparc, Adrien Fainsilber, and Jean Nouvel have given it their best. Doesn’t the Philharmonie de Paris, designed to host instrumental music, look like an aluminium hill? You’ll also find plenty of art pieces hidden everywhere around the park. Look out for the big half-buried cycle wheel! Found it? You can now get to the banks of the Canal de l’Ourcq and ride to the next spot! 🚴 🚴

Stop at this bridge over the canal Saint-Martin near rue Léon Jouhaux. It allows you to go from the Quai de Jemmapes to the Quai de Valmy. Does it look familiar? There’s a chance you’ve already seen it in movies. And one of them might be the internationally famous “Amélie” where the main character Amélie Poulain skims stones on the water. You might also want to learn this major skill. How many ricochets can you do? Once you’ve added this skill to your CV with a picture as proof, get back on your cycle and continue your ride along the canals of Paris. 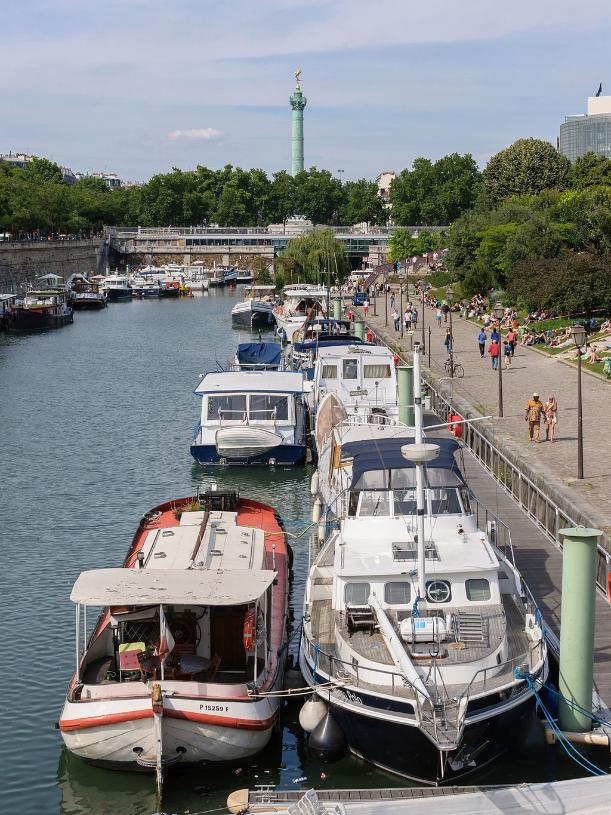 It’s been a while that you haven’t seen water? Don’t worry, you’re on the right track. The Canal Saint-Martin goes underground for about 2 kilometres, before gracefully emerging on the cutest port of Paris. Welcome to the Port de l’Arsenal! Pontoons, small boats, seagulls and seafood restaurants, this tiny marina will remind you —or give you a glimpse, of French seaports. Once you’ve debated on whether you would like to live on water after checking the local houseboats, you can rest under the silk trees of the port garden. Bored of canals already? Get ready for the big river! 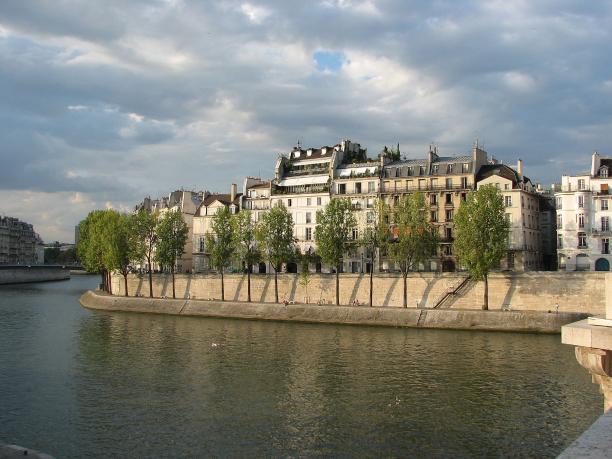 Join the banks of the Seine river on the Quai de la Rapée. You’re getting close to the historical heart of Paris. When the first island of Paris is at sight, cross the Pont-Marie and get on that land in the middle of the river. You’re now on Ile Saint Louis, the smallest island of the city —and also the second biggest! The other island, Ile de la Cité, is right in front. Do you see the spire of Notre-Dame? No? Well, it burnt entirely on 15 April 2019… Ready for a small challenge? Calculate how long it takes to circle around the island. Google Map says you can ride these 1,4 kilometres in 5 minutes. Now cross the island keep following the river on its left bank.

Historically, the left bank —Rive Gauche, is where intellectuals, artists and students historically reside, as opposed to the right bank —Rive Droite, reputed as more conservative and sophisticated. This distinction doesn’t hold much water anymore (pun intended), but you’ll find on the Quai Anatole France a bit of truth in that cliché. Just sit on the wooden stairs that look like outdoor stands and look around you. Behind you is the Musée d’Orsay, famous for its impressionists and post-impressionists —and post-post-impressionists, paintings. If you are lucky, you’ll get to watch performances of stand-up comedians, musicians, dancers and singers premiering their latest creation in front of a live audience. After watching a few amazing performances, it’s time to move to your final destination. 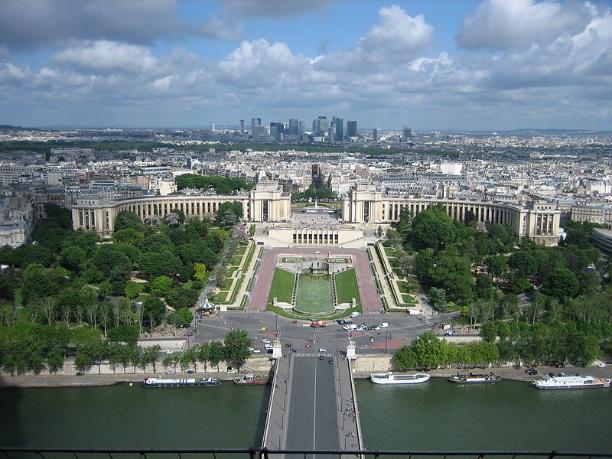 Cross the river on the cute Léopold-Sédar-Senghor bridge and you’re back on the right bank of the Seine. Follow the river till the Pont de l’Alma —yes that’s where Lady Diana died, and feel like a professional cyclist from the Tour de France. They pass by this bridge every single year on their last stage, before sprinting on the Champs Elysées. Now you are going to hit an incline before you get to the Place du Trocadero. Give it your all, it’s gonna be worth it! This is without contest the best place to watch the Eiffel Tower. See the Seine passing by. Hasn’t water been your best cycling guide ever?