Ave Dear friends! You know Paris was not built in a day, right? But do you know the city's story goes back far beyond the 19th century, when the most emblematic monuments were erected from the Arc de Triomphe to the Eiffel Tower? The city has inherited impressive architectural sites that had been built over several centuries and some of those on the Left Bank around the Sainte-Geneviève mountain, where the Pantheon now stands, are even 2,000 years old. Get ready to discover four fascinating sites of Lutetia, the Gallo-Roman city that was the result of the fusion of Roman and Gallic cultures over five centuries (121 AD to 486 BC). Good luck, Centurion! 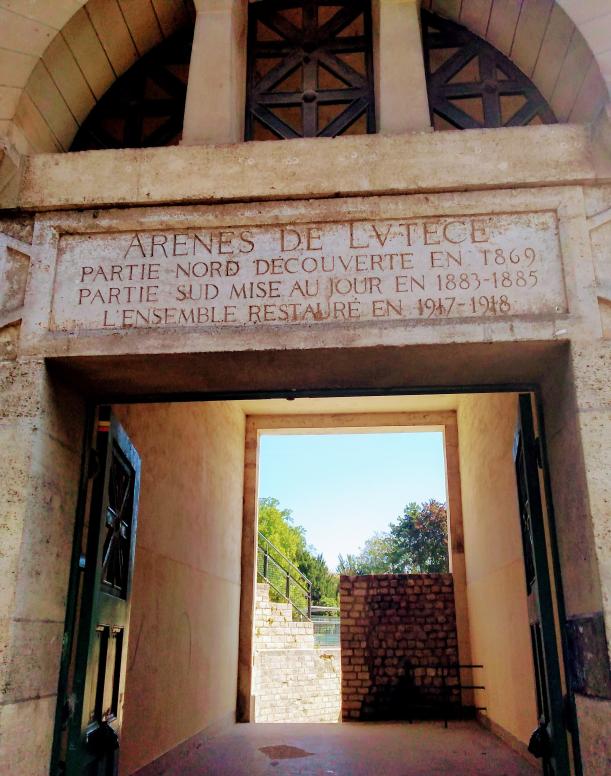 Let's start our challenge with one of Lutetia's most important sites, that is to say the Arènes de Lutèce. The Arènes are open everyday and you have to enter through the modest entrance of 49 rue Monge before 5pm in winter and 9pm in summer to access them. Okay, I know it is a boring empty squaren which basically serves as a football pitch and a petanque ground However, their fate is much less pitiful than of the Forum de Lutèce, the most important building in Roman times, which was discovered in the 1980s and completely destroyed to make space for an underground car park, with the exception of a small piece of wall to be seen inside the parking lot... So I am asking you to make an effort and imagine that twenty centuries ago 15,000 people regularly attended theatre performances and human or animal fights in this place. Believe or not, here stood a magnificent amphitheatre that was built in the first century AD. After the barbarian raids at the 3rd century, the amphitheatre was dismantled and the stones were used to erect a protection wall around the Île de la Cité and then the Wall of Philip II Augustus (13th century), the oldest wall in Paris that you can still observe on the Right Bank at rue du Louvre and rue des Jardins-Saint-Paul. The Arènes then became a cemetery and were eventually forgotten until the 19th century. In connection with the people's passion for Antiquity and Middle Age in the 19th century, the Arenas werehalf fortuitously rediscovered during the excavation works directed by famous architect Theodore Vaquer that aimed at constructing the future rue Monge. After the discovery, the restoration works lasted until 1918 and resulted in clearing two thirds of the old site. Not impressed? Wait a bit. 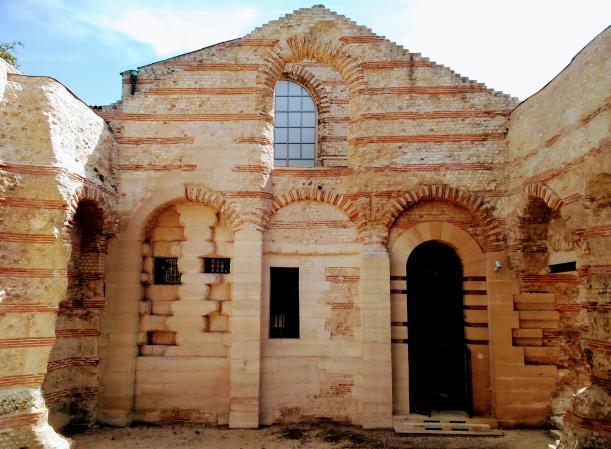 Now head for the Thermes de Cluny (Cluny Thermal Baths), the other best-preserved Gallo-Roman site in Paris. The baths are reachable through the Cluny Museum, which has one of the largest collections of medieval art and objects in the world, in case you are interested. It also houses extremely ancient objects, including the Pillar of the Boatmen, which I will present you shortly, provided you stay in the frigidarium. This will be an easy task because the frigidarium is simply beautiful and the best preserved part of the thermes. There is an ancient pool, an impressive 15-metre high vault, as well as well-preserved walls made of bricks set with some original blue and red stones. You can also visit the caldarium and some underground tunnels to complete your tour. The visit will be short because the building you are visiting today covers only one third of the old complex since it used to expand to Boulevard Saint-Germain and Boulevard Saint-Michel, until it was ransacked by barbarians hords and the Vikings. The baths were constructed in the 3rd century by the Boatmen corporation (read later who these guys were) and they served as a place for bathing, physical activity and meetings. The current name dates back to the 14th century when the baths were purchased by the Benedictine monastery of Cluny, which financed the completion of the Hotel de Cluny at a later stage. Alas, the baths got neglected soon and they eventually became a stable, until the State took possession of them in the 19th century and began excavations under the supervision of, again, architect Theodore Vaquer. 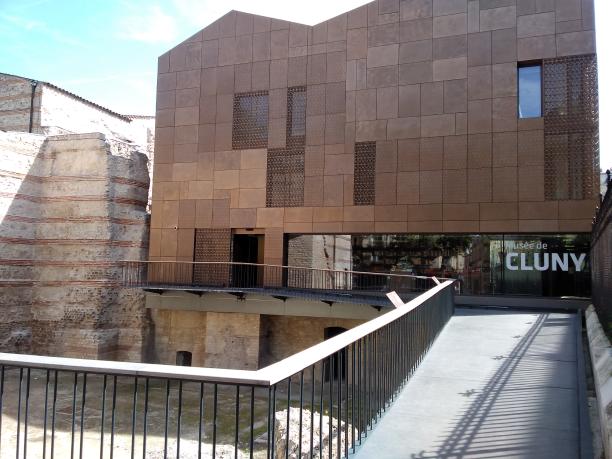 Pillar of the Boatmen

This 2.5 metres high column is called ''Pillar of the Boatmen'' because it was an offering to the Roman emperor Tiberius by the powerful corporation of the Boatmen, who used to control the river as a trade route and greatly benefited from the region's economic development under the Romans. The monument was constructed in the first century and was secured underneath Notre-Dame de Paris Cathedral until the 18th century. The original column was made of ten blocks and measured 5 metres. It was divided into two parts and only the upper part remained because the lower parts were used a couple of centuries afterwards to build a protection wall to defend the city against barbaric invasions. Let's have a better look to the pillar now. The blocks are all different. The first block features the four deities, the second one pays tribute to the ''Dé de Jupiter', the third one recalls the eight deities and the fourth is named ''the block of dedication''. All blocks have bas-reliefs and they all feature armed persons as well as Gallic and Roman deities, whom you may identify through some inscriptions both in Latin and Gallic. I particularly appreciate the Pillar for its age, its refined details, and because it is a symbol of peace and tolerance for it illustrates the capacity of antagonistic culture to coexist and influence one another. I love also the name, but that is a very poor argument, I know. In short, if you like this kind of columns and very old objects, I suggest you to visit at some point the Carnavalet Museum, which is dedicated to the history of Paris. However, the museum is closed and being renovated. You will have to wait until 2020 to plan a visit, so stay in the surroundings. 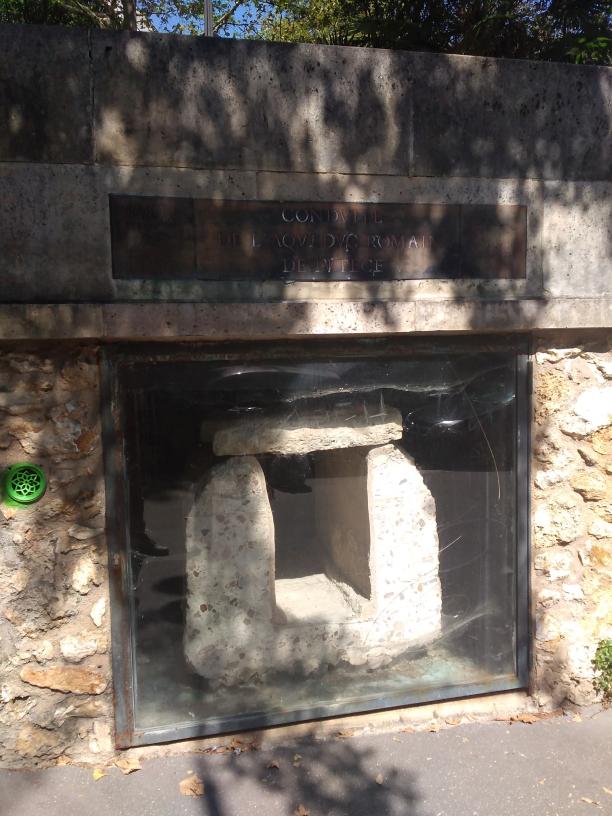 After this indoor visit, I think it's time for you to take a walk outside. I therefore propose that you go a little further south, via the RER B line to go faster, towards the Montsouris parc, which I introduce in another challenge. This is where the Lutetia aqueduct once passed and it is here that several remains were found in the 19th century. The important Gallo-Roman aqueduct, also known as the Lutetia aqueduct, was built under Emperor Septimius Severus (145-211) to supply the city and the thermal baths of Cluny, among others, via the Sainte-Geneviève mountain, with water coming from the current city of Wissous. The remains are also located in the 14th arrondissement, in Montsouris parc, as well as around the commercial area of Alesia-Montsouris and along the Medici aqueduct, another aqueduc from the 17th century that is still operational. To draw attention and pay tribute to that heritage, some medallions have also been placed on the ground to remember the route and the surrounding streets have been given Roman names. That's all folks about the Gallo-Roman challenge. I would have loved to suggest other spots or more complete ones, but you have to use your imagination sometimes. That said, some ''new'' remains are slowly but surely emerging from the ground and you will be able to visit them soon. Among these, I am referring to the discovery of two major necropolises of Saint-Marcel-Gobelins and the Faubourg of Saint-Jacques. I am also thinking of the very recent finding of the capital of the Parisii tribe, who occupied the city in the 3rd century and gave their name to Paris. Spoiler alert: their city was not located in Paris, but much further to the west, in Nanterre!