Oh, the magic of Christmas! Ah the charm of Paris, the city of lights!... You have really made an excellent choice this year and so I decided to give you a gift before Santa Claus himself. I am offering you this special Christmas challenge with five top destinations. The longest travel time will take thirty minutes to enjoy most of the time at each location. No no, don't thank me, I really mean it. 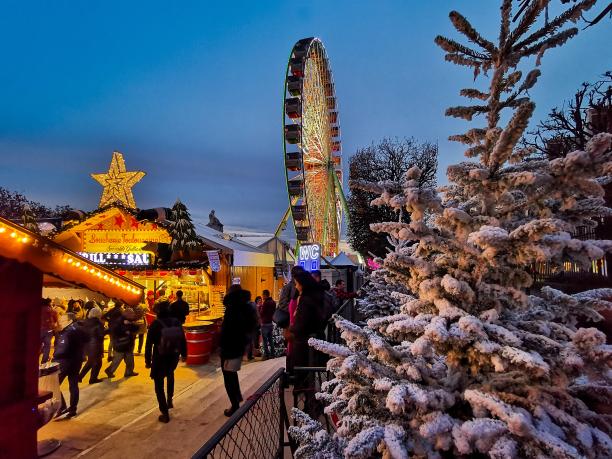 Let's start with the Jardin des Tuileries Christmas Market in Paris. The largest festive fair in the French capital is held in the Jardin des Tuileries, which name derives from a tile factory that used to operate in the vicinity of the long gone Louvre Castle. The garden totals 25 ha and is divided into an area covered with trees called Le Grand Couvert, an area with french gardens called Le Grand Carré and the Octogonal Bassin. After, or before, a short walk around the garden, go and visit the Christmas Market, home to over a hundred wooden style chalets, faithful to what a real Christmas market must look like. You can find winter favourites such as an 1400 m2 ice skating rink, French cuisine, gifts, and wine, as well as plenty of fairground rides. For those who have a more traditional take on Christmas markets, there’s several beautiful carousels. Entrance to the market is free of course, but you’ll have to pay for the rides and the gifts for all your loved ones. The entrances to the market are to be found at various points around the park, along the shops of Rue de Rivoli, at Place de la Concorde in front of the Champs-Elysées, and in front of the Louvre Museum, in case you really have no clue of how to spend the last hours before Santa Claus comes in town. The market should open from November the 23rd up until the 5th of January. 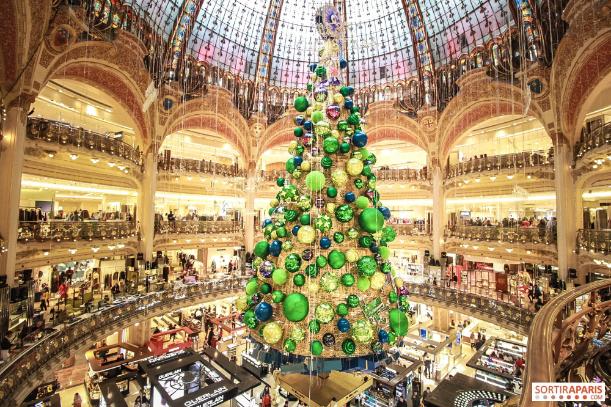 The 2019 Le Printemps Haussmann Christmas windows were designed this year by the gorgeous Italian influencer Chiara Ferragni and they feature characters of children's tales. You will see over 60 puppets and stuffed animals getting ready for the holiday season, including parrots in cabaret shows, squirrels making coffee, turkeys refusing to be plucked and other funny scenes. The show is also inside the store, where nearly two hundred trees have been spread out along the aisles of the store. Then, when you are ready, take the elevator to the top floor and head towards the toy department. One thing: be careful with your budget, it is just the beginning of the challenge!

Just next to Printemps Haussmann, the Galeries Lafayette Haussmann is staging a Christmas hive this year from 20 November 2019, that is to say two weeks later than Le Printemps. You will find 11 paintings that feature 14 characters inspired by bees: a lights festival, a banquet of the Queen or a Winter Gardens; some bees cook in the kitchen and other ones take care of the lighting. The Queen, like all beauty queens, is making up. If you are afraid of bees (I do, personally), take refuge inside the store and discover the immense giant Christmas tree under the incredible dome. But be careful, though: every 30 minutes, you will a swarm of bees take off from the tree! If enough of bees, go straight to the rooftop, where, for the first time, you can access a 160m2 ice rink for free! It is open from 9:30 am to 8:30 pm. You may be disgusted with flying insects, but maybe your sweet honey bee loved the show? So if you still have some spare time, you can visit other stores that are famous for their Christmas decorations. I recommend the Bon Marché Rive Gauche (see Challenge Writers in Paris), which celebrates Christmas from November 6, 2019 until January 1, 2020 with trees topped with neon crowns of kings. The BHV on Hôtel de Ville is also worth a visit, although it is not on your way to the next stop, the horror manor house. 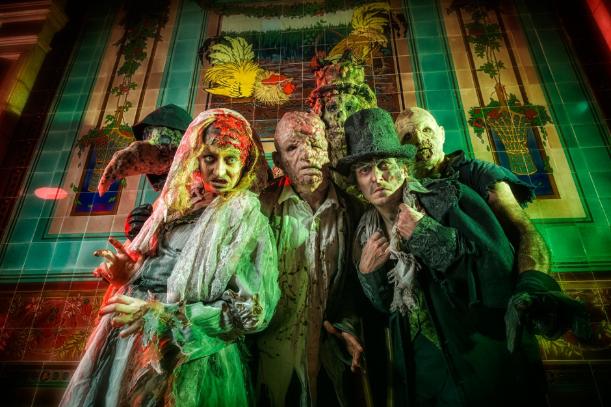 I agree, shop windows and stuffed animals are cute, but it's a little kitschy. So I now offer you something much more challenging and thrilling. Head east from Paris, towards the Gare de l'Est in direction of the fantastic, or horrific, Manoir de Paris, to celebrate a gory and bloody Christmas. Santa Claus dresses in red, doesn't he? I knew you are kind of special and you don't like to do as others do. So here we are!
The Manoir de Paris was opened in 2011 and it is an interactive haunted house. It revives in the prestigious setting of a listed residence some twenty crazy Parisian legends that are performed by 35 professional actors. Thrills and entertainment are guaranteed! Actually, the theatrical adventure begins as soon as the queue starts in the entrance hall where monsters frighten the spectators, giving a slight foretaste of what awaits them. It then continues, once the airlock has been crossed behind the thick black velvet curtain that gives access to the interactive route of the legends. I know, you're going to ask me if there's not a nicer way to celebrate Christmas, especially if you're accompanied by very sensitive children. I want to be nice with you, so here are two options. Not far away, you can visit the wax museum of Grévin Museum, the equivalent of Madame Tussaud. Otherwise, if you already feel bad just by seeing a drop of blood, you may head to the mansion's third floor to have a nap at the Royal Hotel Paradis. Good luck!

The Sainte-Chapelle is one of the rare surviving buildings of the Capetian royal palace on the Île de la Cité. It was built in record time, only 7 years, against one hundred years for Notre Dame, which you will not be allowed to visit, unfortunately until 2022. It is considered one of the most beautiful symbols of the rayonnant period of Gothic architecture and it hosts one of the world's most impressive 13th-century stained glass collection. The show is not free and it will cost you at least 40 euros per person, but as they say, no pain no gain. And it's the experience of a lifetime and you will not regret it! The setting of the concert is simply unique. You are seating in the chapel of the kings of France to listen to choirs singing some of the most famous and beautiful works of the religious Christmas repertoire. This year's program includes: Popular and sacred Christmas songs, Selected works of Johann Sebastian Bach, Arcangelo Corelli and Henry Purcell. Even if you are not into that kind of music, you won't have time to get bored. Anyway, the show should only last an hour, just long enough to recover from your emotions at the Manor and warm your body before getting back to the cold winter. I know you like to have a minister's agenda, so now head west of Paris and the circus! 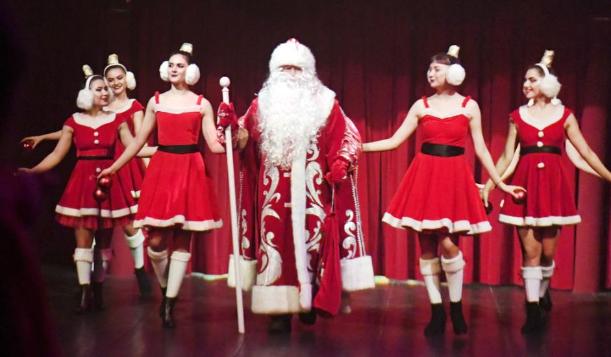 After Christmas songs, let's stick to Santa Claus vintage celebrations with a visit to the circus. However, I am not suggesting a kind of boring, ordinary and tasteless circus, but rather one of the oldest in Paris. To find it, you need to go to the 16th arrondissement, not so far from the Bagatelle park (see Challenge Gardens of Paris) and just next to the acclimatation garden (it is another nice little visit for the children if you are still on time). If you like horses, acrobatics, clowns and midnight masses, you should expect a huge show. The reception tent and the 2000 m² reception areas already give you a foretaste of the show. Indeed, Santa Claus needs space for his activities as he came with a lot of friends such as musical bands, jugglers, balancing artists, waders, cartoonists and many more other entertainers. The circus also offers balloon workshops, magic workshops, wooden games, fair stands and of course video games because it is almost 2020, as you are well aware of. In addition, the circus celebrates this year 250 years of the creation of the track and the Gruss family has prepared a special show with 40 horses, 11 artists, and an orchestra. The circus will also offers special dinners although it is kind of expensive (125 euros per person). Otherwise, focus on the show. It starts at 9pm, before the vigil at 10:45pm and the Christmas Mass, led by nothing less than the Archbishop of Paris himself! Et voilà, dear friends, that's it for today. It was a long day and I hope you enjoyed it. If you have followed my instructions correctly, you should have in your hood several toys, a CD of Christmas songs, a magnet, a penguin plush and a mug that you did not return to the locker after the mulled wine because it is too beautiful. Am I wrong? Mama Santa Claus will have to clean up again.