Green spaces and parks in Paris

Ah Paris! Its monuments, its restaurants, its museums and its tourists... Don't you see the common point between all of these? Yes, indeed. They are beautiful and thrilling, with, maybe, the exception of a few pimply teenagers and bellyful thirty-somethings who walk around in pants or tight tights. The other common point is that they are all slightly stressful. So, if you feel the need to escape to avoid asphyxiation, this challenge is for you. Discover some little worlds of relaxation to recharge your batteries and think of something else but to avoid walking on your neighbour's feet! 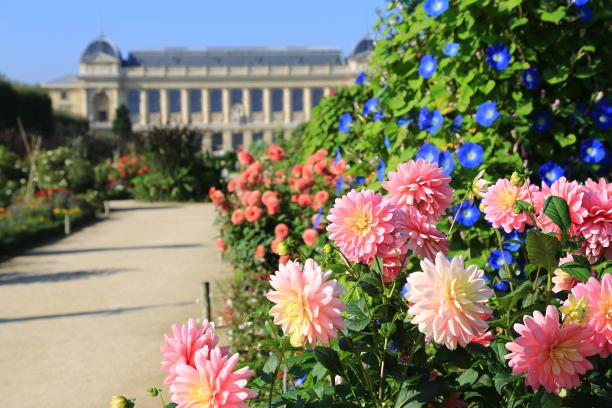 Common tourists usually prefer visiting Le Louvre or the Latin Quarter, but I knew you were kind of special. So here you are, in the Eastern part of Paris, on the Left bank, next to Austerlitz railstation and just in front of the Gare de Lyon. Not the most romantic place you may say. Well, sorry to disagree. The fifth arrondissement and especially this part of the district is full of surprises. One of the first is the giant Jardin des Plantes, which is the largest botanical garden in France and covers 28 hectares (280,000 square meters), i.e. four times the size of Versailles gardens that you may have already visited, unless you plan to visit it (in that case, see Challenge "Parisian Castles"). Botanical activity began in the 16th century because of the quality of the land in the area and the Bièvre River (see Challenge "Parisian Castles"), which provided irrigation for plants. The garden itself was created in 1626. It underwent important developments in the 19th century that gave it the definitive appearance you see before you. The Plant Garden includes to the north a set of English gardens with classical features such as a maze and a belvedere that were set up in the 18th century: to the south, you see a large perspective à la française with regular lines of trees and flowers. Everyone has their own tastes in the garden. Personally, I have a weakness for French style. No offense! The garden hosts four main buildings, including the Grande Galerie de l'Evolution (see Challenge "Kids in Paris") and a small zoo (La Ménagerie hosts about 1,100 animal species). It also features horticultural displays of decorative plants, as well as an Alpine garden, a rose garden, a winter garden and Mexican and Australian hothouses. Not bad, right ? 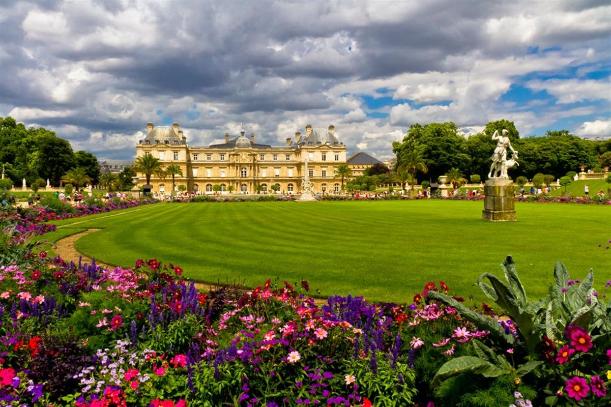 Like a lot of Parisian monuments, the Jardin du Luxembourg was commissioned by Marie de Medici, who decided in 1612 to build a palace near the church dedicated to St. Genevieve and which would become the Pantheon. Contrary to what people think, the name of the garden does not come from the country of Luxembourg but from the Latin Mons Lucotitius, the name of the hill where the garden is located. As you may know, Paris used to be a galloroman city and its heart was located on the St. Genevieve hill, a few hundred meters from the park (see Challenge "Galloroman Paris"). In 1611, the widow of King Henry IV of France and the regent for the King Louis XIII purchased the hotel du Luxembourg to build a palace that would imitate the Pitti Palace in Florence. One year later, she directed the construction of a 8 hectares garden that included two terraces, parterres, a circular basin and a fountain that will be called the Medici Fountain (see challenge "Romantic Paris"). Almost twenty years later, she enlarged the garden to thirty hectares, and entrusted the arrangement to the indendant of the gardens of Tuileries, who implemented the ''jardin à la française''. After that, nothing really important happened until the 19th century and the massive reconstruction of Paris under Louis Napoleon (Napoleon III), which resulted in significant changes in the surroundings of the park, notably the removal and the reconstruction of the Medici Fountain. Some emblematic statues were also installed in the garden (their total number is today 106), including monuments dedicated to writers and artists (Verlaine, Stendhal, Flaubert...) and a small-scale model Statue of Liberty by Bartholdi. The garden is officially owned by the French Senate but it is a public space of course and there are lost of things to do there for every one. Kids will enjoy the théâtre des marionnettes (puppet theatre) as well as outdoor playgrounds, and adults will love to play chess, tennis and sail model boats in the central basin. By the way, you can also visit the greenhouses, the rose garden, the apiary or the bee-house. Do I need to remind you that you are doing a naturalistic challenge ? 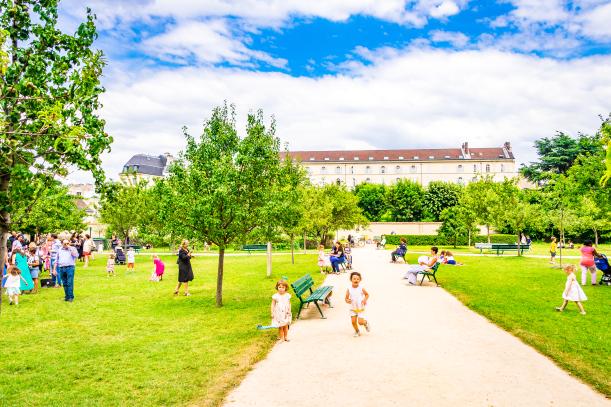 No one could imagine a countryside corner hiding behind the stone walls of the rue de Babylone just steps from the Bon Marché (see Challenge "Writers in Paris"). One of the city's best-kept secrets, this former convent garden welcomes the public on its spacious lawns or under its shady arbours. This little break can only do you good, after so much stress looking for the ideal pair of shoes for your evenings at the ambassador's house or the wool sweater that will delight your beloved mother-in-law. To do so, nothing could be easier: simply agree to leave the department stores, take a minute to admire the facade of the famous Lutetia hotel, which is opposite Le Bon Marché, and then go around it, either to the right or to the left. The closer you get to the garden, the more you will be struck by the quiet of the place. Once you see a large surmounted stone wall and a very small entrance, you will know you are there. Come in, the park belongs to everyone. Maybe you need a little encouragement, so you should know all the visitors can pick all the gooseberries, apricots, apples and cherries they find in the trees. The Catherine-Labouré garden (a beatified sister from the 19th century who is believed to have talked to Virgin Mary) is not very large but in my opinion it has the perfect size to allow you walk around without hordes of noisy visitors. However, if the garden leaves you wanting more, then aim higher and head further west of Paris. 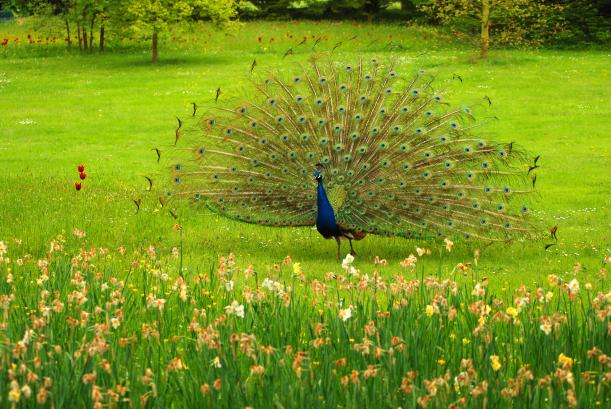 It is never really easy to get to the Parc de Bagatelle but here you are. It was a bumpy journey : you took the metro, the bicycle, your fancy skate or sports car, then went through the Champs-Elysées and the Avenue de la Grande Armée and you survived the roind-point de l'Etoile. If only for that, you deserve a round of applause. Clap ! Clap ! clap ! Then you turned left (unless you have got lost before) and you noticed from the distance the amazing Louis Vuitton Foundation building. You have also passed by the Jardin d'acclimatation (it is a children's amusement park, nothing to do with air conditioner!), but you didn't stop, either because you don't have any children yet, or they have grown up or you are keeping them in good shape for the "Kids in Paris" Challenge. Did you know the construction of the park of Bagatelle was the result of a bet between Marie-Antoinette and the Count of Artois? The queen challenged the Count to build an entire estate in only sixty-four days and he succeeded! To do so, he asked to draft the plan of the park in one single night and he hired 900 workers to keep up with the schedule. The result exceeded the earl's expectations. The garden's style is said to be Anglo-Chinese because of the mixture of English gardens and the presence of Asian decorative elements such as temples, Hindu pavilions and furniture that were called "chinoiseries" at the time. The park is a real pleasure for lovers and fans of flowers. Hold your breath: the Bagatelle garden is home to a fantastic rose garden with nearly ten thousand roses! I like many things in the garden. First, it is modest: its total area is the same as that of the Jardin des Plantes, but no one would guess so. Secondly, the collection of flowers is simply fantastic. Finally, the garden is so much fun : you can walk through caves, hide in the groves and feed the squirrels. One last funny word about Bagatelle. In 1907, the first ever V8 plane took off from the park and guess how it was called ? "Antoinette". 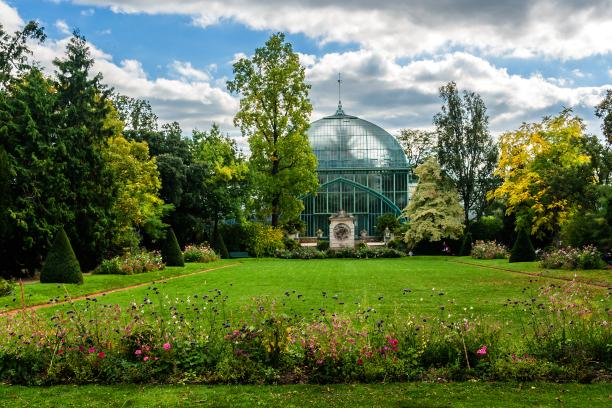 Here you are at the last stage of your 100% natural journey. You landed in the very chic district of Auteuil, at the western end of Paris and inside the Bois de Boulogne. You are very free to stroll around and you can even take a bus to reach Saint-Cloud to watch a horse race in the famous racecourse. But be patient. I am sure you are going to love Auteuil's greenhouses. The Auteuil Garden is one of the four botanical gardens in Paris (together with the Floral park in Vincennes, the Jardin des Plantes and Bagatelle). Although relatively new, the garden already has a long and winding history. To make a long story short, because you didn't come for this, you just need to know that the garden dates back to the 18th century when Louis XV built a garden and some greenhouses in the Parc de la Muette, a few hundred metres from the Porte d'Auteuil, which grew to 30 greenhouses and three million plants at the end of the 19th century. Unfortunately, part of the garden was lost following its transfer to Auteuil because of the major works that were taking place in western Paris. At the end of the 1960s, the garden was again amputated by a third of its surface area in connection with the construction of the ''peripherique'' (ring road). Then, in 2011, another controversy started because of the project to extend the Roland-Garros tennis stadium. The works are currently in progress. So here is a little friendly advice: don't talk to the intendant about your tennis game in the Luxembourg garden, he might not appreciate that at all. Now you can start your visit. The garden has French-style, Japanese, Mediterranean and contemporary gardens. It also includes five main greenhouses in Art Nouveau style. Among them, the large greenhouse deserves special attention because it is divided into three different climatic areas, a tropical garden, a palm grove and an orangery. Finally, here is the best part of the challenge for plant and flower lovers. The greenhouses contain as much as six thousand plant and animal species, including ficus, Canary Islands palm trees, gingko bilobas, Indian lilas, magnolias, begonias and orchids, not to mention exotic animals such as Japanese carps. This is a small paradise. Enjoy it, the return to civilization may be hard! It's over, my friends. Your lungs say thank you, but not your heart because you will break it when you finish your challenge. But you must be reasonable, you covered about thirty kilometres today. It's time to eat (maybe at the huge green rooftop of Paris in Porte de Versailles?) and go home. But if you really enjoyed interacting with Mother Nature, then tomorrow you can visit some other of the city's 145 parks. One of your top priorities? The viaduc des Arts near Bastille.