The architectural evolution of Paris has always been influenced by the great men of the past, whether they were kings (Henri IV, Louis XIV), presidents (Pompidou's art museum, Mitterrand's pyramid) or engineers (Haussmann). Among the latter, Eugène Viollet-le-Duc (1814-1879) stood out for his contribution to the protection of French heritage. Born and raised in a wealthy and influential family, he also took advantage of a growing interest in the medieval heritage in the 1830s to launch his career. His first works concerned the basilica of Vézelay and the Mont-Saint-Michel. Nevertheless, his fame was first and foremost due to his management of Parisian development projects, which I propose you to visit in four stages. Put on good shoes (walking distance 26km) or take a metro pass (2 hours by metro) and let's go. 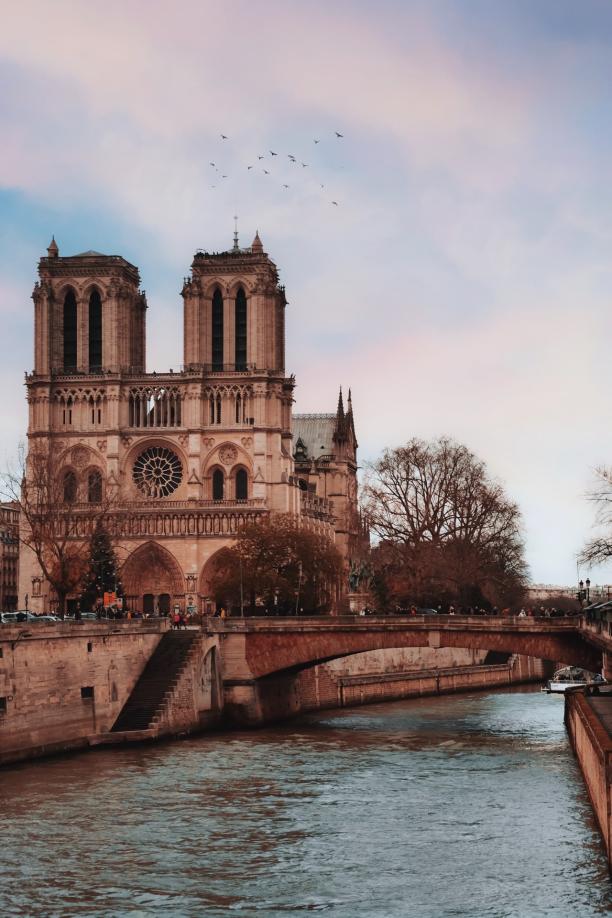 Is it still necessary to present this World Heritage monument? Maybe so, even if it is only a part of our challenge. As I am sure you are aware of, Notre-Dame's construction started around 1163 and was largely completed around 1260 (the official date is 1345) under the reign of Saint-Louis (there is a challenge partly dedicated to him. Two religious buildings preceded it, notably the Jupiter temple under the Romans, and Saint Stephen basilica (then cathedral) for over eight centuries. Notre-Dame is 127m long, 48m wide, the towers are 69m high and the old spire 96m high, its total area is 5,500 square meters and it accommodates nearly 9,000 people.
As incredible as it may seem, the cathedral was almost destroyed at the beginning of the 19th century after the ravages of the French Revolution and despite the fact that Napoleon was crowned Emperor of the French there in 1804. Actually, this decision to demolish the cathedral was not ideologically motivated but practical because the building was in a very bad shape after the State acquired it in 1789. It was precisely to avoid this disaster that Victor Hugo decided in the early 1830s to dedicate a book, The Hunchback of Notre-Dame, to raise awareness and save the cathedral. The success of the book paid off and shortly after its publication, the government launched a program of rehabilitation.

Viollet-le-Duc's work took place between 1844 and 1864. He carried out extensive research and he mainly focused on the restoration and embellishment of the cathedral. Among major contributions, one may mention the construction of the sacristy, the refurbishment of the gates and the glass roofs, as well as the mounting of the famous arrow and of some 100 statues that had been destroyed during the Revolution. As you surely know, the cathedral will not be accessible for several years due to the 2019 fire. However, nothing prevents you from admiring the beauty of this Gothic building and, incidentally,from crossing the Seine to visit the René Viviani Square, where you will find the oldest tree in Paris, which was planted in 1601.

The Sainte-Chapelle refurbishment was Viollet-le-Duc's first major work and helped him win the 1842 call for tenders for the Notre-Dame renovation project. The Holy Chapel is an extremely impressive monument. It is located 500m from the French road system's Point Zéro spot on the ground in front of Notre-Dame. Paradoxically, this very prestigious monument is much more visited by tourists than by Parisians themselves. Why that? I assume this has to do with the French passion for secularity and republicanism, unless the Parisians are intimidated by this noble place. One more explanation would be that the geographical proximity to the Justice Court may influence the way many Parisians decide to wander on Sundays! The Sainte-Chapelle is a royal chapel on the Île de la Cité. Along with the Conciergerie, it is also one of the earliest surviving buildings of the Capetian palace. It is constructed within the medieval Palais de la Cité, which used to serve as the Kings of France residence until the 14th century (the revolt led by Etienne Marcel eventually decided them to move away from Paris centre and settle first in Hotel Saint-Pol, then Le Louvre and the Tuileries Palace). Afterwards, the Sainte-Chapelle becamethe headquarters of the French treasury, of the judicial system, of the Parlement de Paris, and a prison (Marie Antoinette was held there). The construction began around 1238 under Saint-Louis (him again!) and was achieved ten years later,, and it incorporated strong elements of Gothic Rayonnant style. It also hosted the king's collection of religious relics (what else to expect from this pious king?), including the Crown of Thorns, which was transferred to Notre-Dame afterwards, until 2019. If you find the courage and patience to stand in line for a very long time (1.5 million people visited the place in 2018), I promise you will not be disappointed. The Sainte-Chapelle is a real jewel. Actually, I would rather say “chapels” because there are two of them, i.e. the lower and the upper chapels. However, the upperchapel is definitively my favourite for obvious reasons. I bet you will long remember the amazing 13th-century stained glass collections, the height under the vault (20 meters!) and the colours intensity. But if you are still not impressed, move to step three, the suburbs... 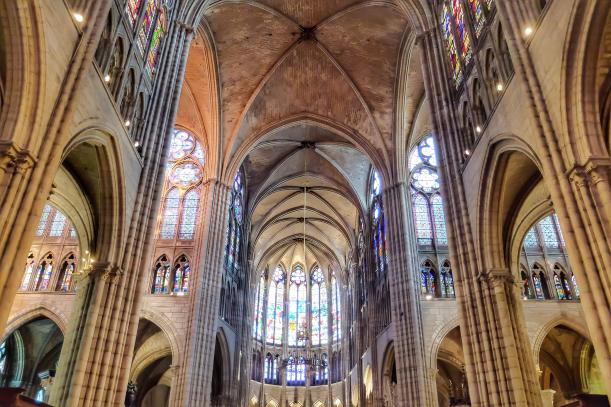 The last resting place of the kings of France is truly worth a visit. Okay, it is not in Paris, and I congratulate you for venturing so far into the Seine-Saint-Denis department, France's poorest department. But don't worry, your boldness will be rewarded. And contrary to the legend, according to which martyr Saint Denis walked with his head in his hands for six kilometres from Montmartre to Catulliacus, the future city of Saint-Denis, you will only have your head spinning because of the historical richness of the basilica. Unjustly neglected by tourists and locals alike, the cathedral basilica is a fascinating place. Admittedly, we can afford to doubt the authenticity of the burials in the necropolis because of the ransacking that took place during the French Revolution. But if we accept this principle, then we can only be amazed to know that such famous figures as Henry IV, Mary de Medici, Louis XIV or Louis XVI are buried here. Contrary to the Sainte-Chapelle, Viollet-le-Duc's footprint on the basilica (1846-79) is very visible but also very controversial. On the one hand, the site owes to him its rebirth and the development of the tombs and recumbents as you see them today. On the other hand, the surprisingly asymmetrical building is also due to him. He was the person who ordered the demolition of the still missing North Tower because he believed previous restoration work had been poorly carried out. However, some suggest that this radical decision was solely the result of a power and influence struggle with his predecessor (François Debret) as project manager. Don't despair. I have some good news for you. The city of Saint-Denis jointly with the Government agreed in 2018 on the reassembly of the spire, 150 years or so after its demolition. This incredible project should restore the basilica to its original appearance and last about ten years. Now you understand the reason of your venue. I wanted you to have a discreet glimpse to France's majorrenovation project of the 21thcentury. 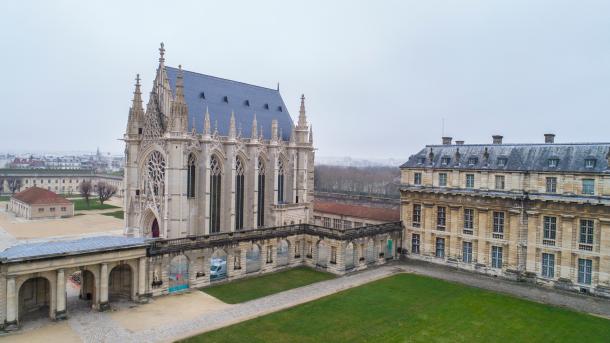 Even less loved than the basilica, to the point that it almost disappeared several times, the castle of Vincennes is being slowly reborn. However, it is still struggling establishing itself as a historical monument, which vocation is theoretically constrained to decorative and memorial functions. More than its location, east of Paris, I think that the military and sordid history of the place has contributed to the negative image of the castle. It was built from the 14th century to serve as a hunting mansion in the adjoining woods, but rapidly became a place of imprisonment and death of famous figures such as Henry IV, Cardinal Mazarin, the Marquis de Sade, Voltaire, Diderot... This may also be related to its massive appearance (330m x 175m), that is to say a one-kilometre long wall, six 42 metres high towers, and a 52-metre high keep, which makes it the tallest medieval fortified structure in Europe. However, the castle has also graceful elements to promote. First, you can find a fragment of the Crown of Thorns that we have already mentioned twice in the chapel. Secondly, the chapel was built on the model of the Sainte-Chapelle you visited earlier in this challenge and is really worth a visit. Finally, you are here to enjoy Viollet-le-Duc's contributions, which focused on the chapel, the keep, and the park. Although these works did not have the success of the other sites, they contributed to Viollet-le-Duc's reputation as a specialist in medieval architecture. That's it for today. I hope you enjoyed the walk and I think you've earned your rest. But before returning home, you should pay tribute to General Daumesnil, who became famous for his punchline during the defence of the Fort de Vincennes in 1814. He said, not without humour, that he shall surrender Vincennes when he getshis leg back (FYI, Daumesnil lost one leg). His statue is just two steps away, if I may say so.