Paris with kids in winter

Heigh-ho! How are you doing? Not too cold? Not hot enough? My goodness. In both cases, I made a crazy program for you that will raise the planet's temperature. Your credit card will also heat up, I have to tell you, but so what? Memories never fade away, don't they? On the menu: Mickey Mouse, whales, ice skates, a boat ride and fireworks. Take a pill, just in case you feel dizzy. 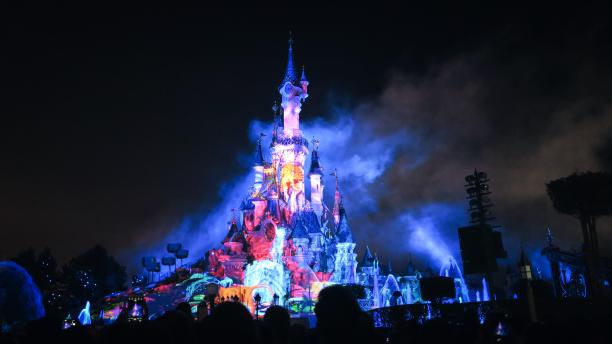 Disneyland stands on every visitor's to-do list and it has become the second most visited site in Paris before the Eiffel Tower! Honestly, I can understand that. Who can resist to the magical world of Mickey and the mysterious universe of Star Wars and Darth Vador? So, yes, you want to go to Disneyland and that's the reason I put it early in your day, so that you can manage to visit other places after the park closes at 6 pm. I know you will not regret this 45 minutes ride from the centre of Paris. Disneyland is much more than one park and one day is not enough to visit the 50 attractions spread out over five areas and two thematic parks Disneyland Park and Walt Disney Studios Park. But look out, you definitely don't want to miss the Disney Parade, Mickey Mouse, Toy Story, The Lion King, Peter Pan, Nemo, Sleeping Beauty, Rapunzel and the Snow Queen and many more. So what time is the Disneyland Paris Parade? It takes place every day, usually at 5:30 pm, but the time may change. Get there early because the Parade draws a big crowed and on busy days like today, you may find it difficult to shake Donald's leg while standing in the third row. 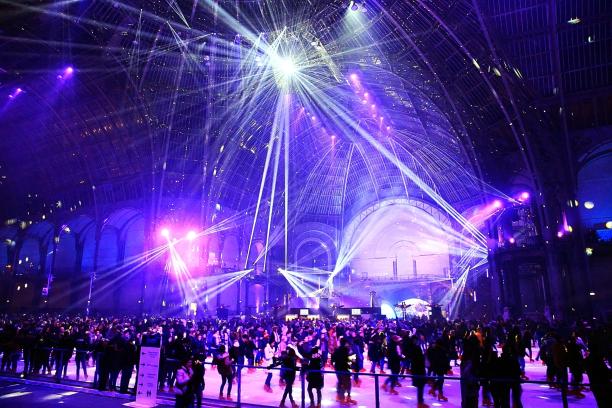 Ladies and Gentlemen! The world's largest indoor skating rink is back for the fifth time from December 13, 2019 to January 8, 2020 in the Grand Palais. Have a look at the 13,500 m² nave, which makes it the largest glass roof in Europe. Yes, you are going to skate here. Isn't it incredible? The 2,700 m² skating rink is located within a historic site of the greatest importance, the Grand Palais, which was constructed in 1897 as part of the preparation works for the 1900 Universal Exhibition. They also included the construction of the adjacent Petit Palais and the Pont Alexandre III (see Challenge "Midnight in Paris"). Light plays and music accompany beginners and sliding professionals and children benefit from a specially designed space. Only damper there will be a lot of people, more than 300,000 visitors came last year, so be prepared to struggle for a free space. There are three slots to skate, two during the day, one in the morning from 10am to 1pm (€17 adults and €12 children) and one in the afternoon from 2pm to 7pm (€25 adults and €12 children), as well as one in the evening. After that, as from 8pm, the track turns into a giant dance floor with star DJs, faceted balls and crazy or languorous dances. I hope you're in good shape, it's going to rock! Do not forget that you are inside a museum complex. Works of art are everywhere. Last year, for instance, a giant piece of contemporary art decorated the track and the benches were painted by street artists (if you like street art, see Challenge "Street Art in Paris"). But if you don't like to mix styles, complete your last triple Lutz and head out to the left exit to visit the fascinating Grand Palais Museum. Otherwise, go right and reach the Seine. 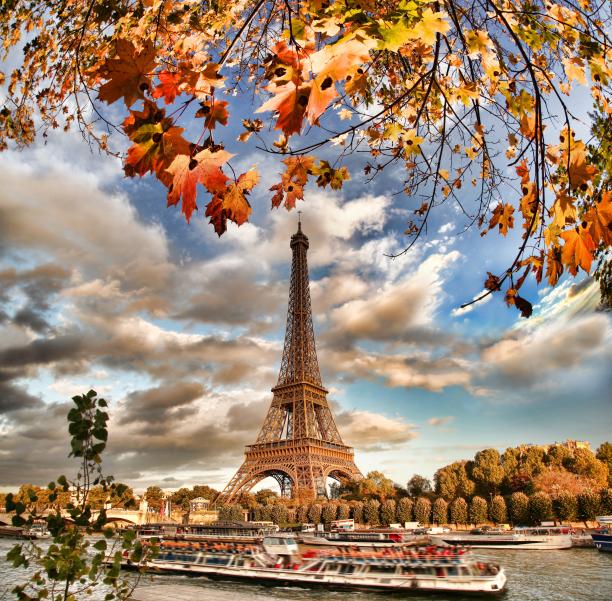 How about a boat trip on the Seine? What is more romantic for lovers and what is more fun for children than a boat ride? There are many offers to visit Paris by boat, but if you choose well, you can find a full visit tour that covers the whole range of Paris from the Eiffel Tower to the Bibliotheque François Mitterrand, with an extra glass of champagne. Don't be afraid, you will definitely not get bored as the visit will be really different from the usual ones. First, the atmosphere of Christmas and New Year gives the experience something special. Secondly, the crew members are briefed to plan cool activities related to holidays and feasts. Finally, it is highly possible that someone special may visit the visitors during the journey... Now. The children are busy and the boat is moving along peacefully, so we have time to talk. Here are some extremely useful information about the river to shine in society. In Paris, the Seine stretches over 13 kilometres, its depth varies between 3.4 and 5.7 metres and its width between 30 and 200 metres. It is crossed by 37 bridges including the Mirabeau Bridge (See Challenge Singing Paris) and the last flood event took place two years ago. In case you have had this strange urge, it is forbidden to swim in the river since 1923. You can't drink the water either. The water from the fountains comes from Orly, where you may have landed. Paris once had three islands that disappeared in the 19th century, that is to say the Louviers Island, opposite the Jardin des Plantes (See Challenge Gardens of Paris), which was attached to the right bank, and the Merdeuse Island (shitty island!) and the Swan Island, which were attached to the left bank. Last but not least, before you disembark, you need to know the name “bateau mouche” does not come from Mr. Mouche (Mr. Fly) as legend has it, but from the district of La Mouche, south of Lyon, where the first passenger transport boats were launched. There, you are free to go. 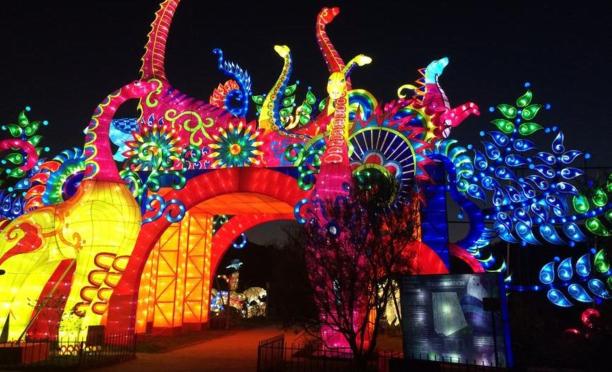 I hope you returned safely to the ground. Still, you will stay in the aquatic atmosphere since you need now to go to the Jardin des plantes to enjoy the second edition of the Lights Festival from November 18, 2019 to January 19, 2020. This year's theme is the Ocean. There should be a lot of people since last year's edition gathered above 370,000 visitors. Fortunately the Jardin des Plantes is the largest botanical garden in France and it covers 28 hectares (280,000 square meters), that is to say four times the size of the gardens in Versailles (see Challenge "Parisian Castles"), so you will have plenty of room to run and play hide and seek (it is absolutely not compulsory). The core idea of the festival is to light up gigantic animal-shaped lanterns as night falls to turn your night stroll into an atypical experience in the alleys and the lawns of the garden. The route begins with giant creatures that disappeared millions of years ago and endangered species such as polar bears, penguins and white sharks. In total, 50 monumental light structures are displayed in 4 different marine environments: tropical coastline, warm sea, mysterious abyss, and cold water. The tour continues inside the zoo with bright animals meet live animals. I am sure your kids will be fascinated by this unusual and poetic festival, with live shows on the theme of fauna and flora and workshops, which aims at raising awareness about environmental protection. Admission is free for children under 3 years old. Otherwise, the entrance fee costs 15 euros. The visit can take place between 6pm and 10.45pm. 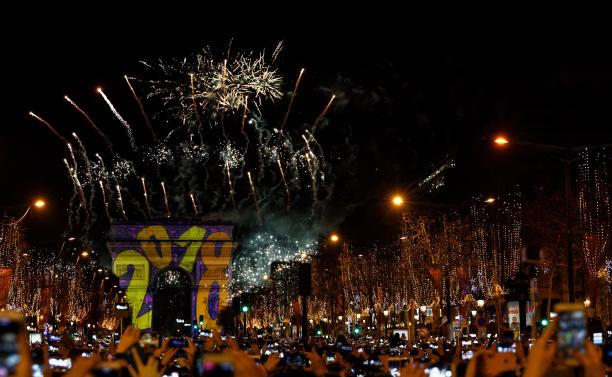 And now, only if you have decided to take part in this challenge on New Year's Eve, here is for you another step to take: go back to the Champs-Elysées for the highlight of the day, the midnight fireworks display. Hurry, one million visitors are expected there! Fireworks were invented in China but they have become a festive tradition all over the world. Not all French cities will stage fireworks today, but the good news for Parisians and tourists alike is that the city has planned, for the sixth consecutive year, an amazing show on the Champs-Élysées, near the Arc de Triomphe. The city has put a lot of effort into making New Year's Eve evening a festive and family occasion. The Avenue des Champs-Élysées becomes a pedestrian street on this occasion, and the shops and metro lines will stay open all night long, which gives an even more pleasant atmosphere to the visit. You don't have to leave early not to miss the last train. It is crucial because the show is expected to start at 11pm with a musical "pre-show" and light projections on the facades of the Arc de Triomphe. The fireworks should mark the move to the following year, as last year, at 11:30 pm and it should last 20 to 30mn. Small tip: think about bringing some food with you or eat something beforehand because the restaurants will be overcrowded. As tradition, don't forget to take a bottle of champagne, or of apple juice, and enjoy the moment. Can you imagine that? You are standing in front of the Arc de Triomphe, one of the countless monuments dedicated to Napoleon (see Challenge "Paris and Napoleon"), and you are saying goodbye to a very good year, just like l'Empereur did on December 31, 1805, when he was celebrating his victory at Austerlitz three weeks earlier. Cheers and see you next year! It's getting wild on the Champs-Elysées, people sing, scream and kiss. No, France has not won the football world cup again. People are simply happy, just like you. Okay, you suddenly aged a year, but it doesn't matter as long as tomorrow is as much fun as today. My little advice to make tomorrow great again? Choose another challenge. And have some rest!