Don't we say that children are the apple of our eye? So unless you have kept your child's soul, which I wish you did, think about offering your successors something they can enjoy in Paris. Paintings and monuments are a good thing, but you can't be serious when you're 17 as Rimbaud used to say. You are lucky because the City of Lights is not only the favourite destination of lovers, it is also a city that strives to please almost everyone (I will not dwell on the forgotten). My programme is really intense, so keep strong and have fun!

Let's start with the north of Paris. It is a region that is rarely visited by tourists and Parisians themselves. Nevertheless, you have here everything you need and even more, you have something special for Paris, i.e. space to walk since the park is the third largest park after Vincennes and Boulogne. What a luxury! The former Parc de la Villette used to host slaughterhouses (see Challenge "Parisian Castles") and served as Paris second hub for vegetables and fruits until the late 1970s. At that time, the city decided to erect what would become the largest science museum in Europe and multiplied the projects that progressively changed the face of La Villette. Among the very last, you may notice the very impressive building of the Philharmonic, which was designed by star architect Jean Nouvel and opened in 2015. The Cité des Sciences offers many attractions for children of all ages. Attractions include an IMAX theatre called La Géode in a shape of a big silver ball, a planetarium, a real submarine ''Argonaute'' that served from 1958 to 1982, as well as various outdoor playground areas for children and teenagers. A special mention must go to the two indoor areas called ''La Cité des Enfants'', one dedicated to the children ages 2 to 7, and the other to 5 to 12. They both allow the kids to actively experiment and explore a series of fun and educational activities divided into different thematic areas. Then, if not enough, just leave the Cité and head to the canal de l'Ourcq. You can buy a ticket for boat ride on a bateau-mouche, which will bring you down to the Seine through locks and underground tunnels. On the way to the estuary of Bastille, you will pass by the lovely canal Saint-Martin. Otherwise, just take the metro and head to the 8th arrondissement to complete your morning dedicated to science. 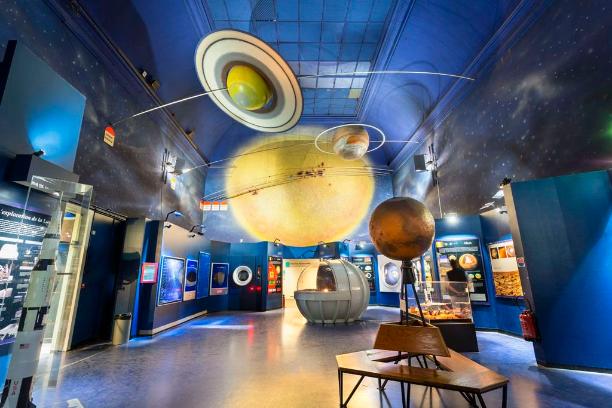 The Palais de la découverte is a museum dedicated to science like the Cité des Sciences et de l'industrie, but it has a vintage style that sets it apart from its partner museum and gives it something special. The museum contains permanent exhibits for astronomy, biology, chemistry, geology, mathematics and physics. It also holds spectacular temporary exhibitions dedicated to dinosaures, volcanos or space odysseys. In addition, the museum includes a very cool planetarium with four different sessions everyday. What I really like in the museum is that it features interactive experiments with live commentaries by lecturers. You can talk to the scientists, ask questions and even take part in some scientific experiments. One of the most most spectacular is undoubtedly the Faraday shield, a sort of enclosure that is used to block electromagnetic fields. The volunteer is emprisoned in a cage to which a massive electrical charge is sent although the prisoner does not feel any pain at all (for more details, please contact the scientist). You may spend several hours in the Palace and if your children are old enough, you can even consider leaving them with the day's schedule, while you go out and head to the other side of the Grand Palais building to visit the Grand Palais Art Gallery, which features some of the most impressive art exhibitions in Europe. Afterwards, you will be free to go to the Champs-Elysées (see Challenge "Singing Paris"), the Invalides (see Challenge "Napoléon") or take the metro (or the scooter) towards the 12th arrondissement. 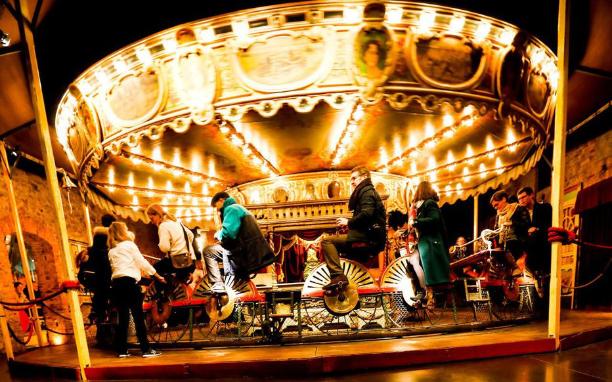 The Museum of Fairground Arts is a fascinating and intriguing museum. First of all, it is not quite a museum but rather a place of memory of the games of the past. It cannot be visited freely and it is necessary to book several weeks in advance to have the chance to visit it. Then, the atmosphere is full of magic and mystery, you have the impression of immersing yourself in a century old atmosphere or living in a movie like Big (the oldest readers probably remember Tom Hanks' first movie) or Charlie and the chocolate factory (without the chocolates, sorry!). The Musée des Arts forains is an innovative lively museum has existed for over 20 years that gives the opportunity to discover centenary attractions. It features objects dating 1850-1950 including 14 amusement rides, 16 fair stalls, 1522 independent works, merry-go-rounds, carousels, German swings, antique bicycles and so much more. The museum was created by a former actor from his private collection and it is is composed of three thematic rooms: "The Venetian Lounges", "The Theatre of Marvels" and "The Fairground Art Museum". I honestly think this museum is a masterpiece and a must-do ! When you get out of the museum, you will find yourself near Bercy Park. There is so much to do there : there is a film library, a movie theatre, a giant outdoor playground and a string of restaurants gathered in an alley called Bercy Village. However, if you are eager to discover your next stage, you simply have to cross the Simone de Beauvoir footbridge, the most recent bridge in Paris, and walk left for one kilometrer. 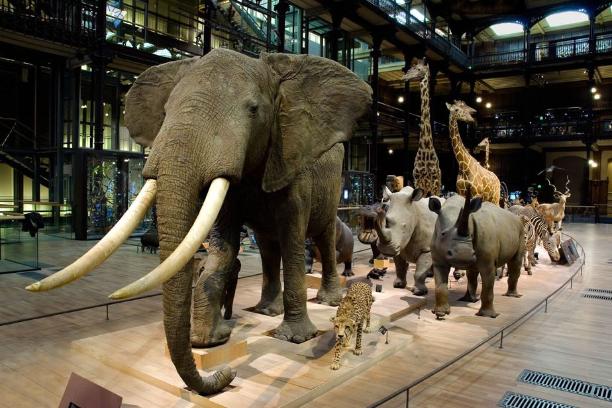 This is a mythical place that has delighted generations of children and parents. I hope your children like science or that you have enough knowledge to explain things to them inside! The Grand Gallery of Evolution, what a powerful name, don't you think? This museum of natural sciences is one of the Museum's various galleries, which in themselves constitute museums. Each specializes in a specific field of natural history and the Grand Gallery focuses on the evolution of species and the diversity of the living world. The Grand Gallery of Evolution is located in the southern part of the Plant Garden, if you enter through the main gate of course. There is another, more discreet one, on the north side, which overlooks the Great Mosque of Paris (a little less kids-friendly) and a little further on the district of rue Mouffetard (see Challenge "Midnight in Paris"). Among the most impressive places to visit, there are of course the whale skeletons hanging from the ceiling and the magnificent collection of animals that is displayed in the central hall. The striking aspect of these animals is due to the fact that most of them are real stuffed animals, which may create a feeling of unease once you know it. But children are less sensitive than adults, so it's okay, isn't it ? Finally, among the other attractions of the Plant Garden, you should know that there is another gallery dedicated to dinosaurs. But if you prefer something more lively or less frightening, you can visit the zoo that is located west of the garden. 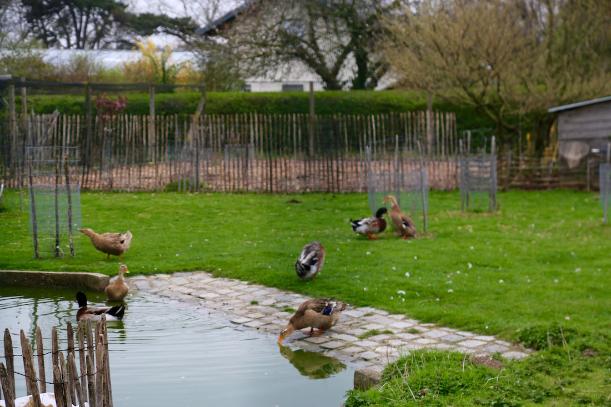 The farm of Paris

Speaking of living animals, miles away from the dinosaures but only 20mn from the Jardin des Plantes, I suggest to visit the Farm of Paris. The place is not very well known, but it is really worth a visit. Parisians have always had a particular affection for farm animals and the entire periphery of Paris was occupied by fields and agricultural land until the early 20th century. The presence of cows, goats and other horses was part of everyday life and has never really disappeared. As a matter of fact, France's largest fruit and vegetable market was located in the heart of Paris until 1971. It then left the city centre of Châtelet and settled in Rungis and only the name "Les Halles" remained as a reminder of that time. Some neighbouring streets also perpetuate the tradition of traditional markets, such as Montorgueil Street (see Challenge Paris Gourmet). The farm of Paris is a 5 ha farm that is managed according to organic farming practices. Its purpose is to introduce children and adults to life on the farm by involving them in seasonal work. Don't worry, participation is not mandatory and you can limit yourself to feeding a sheep or a rabbit. Many activities are organized there in connection with the seasons, which will delight young and adults who have kept their child's soul. To enrich your visit, if you still have the time, you can also take advantage of the other attractions in the Bois de Vincennes such as renting a boat to visit the island of Reuilly (see Challenge "Romantic Paris"), visiting the "flower park" or saying hello to the lion at the Vincennes zoo. If your children are not tired at the end of the day, then I you are raising dragons 🐉🐉