Does traveling make you want to sing? I am okay with that, provided you don't sing too much out of tune. As for your repertoire, let me suggest 7 timeless French hits that I hope you will remember long after your visit. To please everyone, I selected songs from different periods to help you imagine the old Paris and the feelings it inspired to her visitors and residents. I hope your headset isn't broken, you'll definitively need it 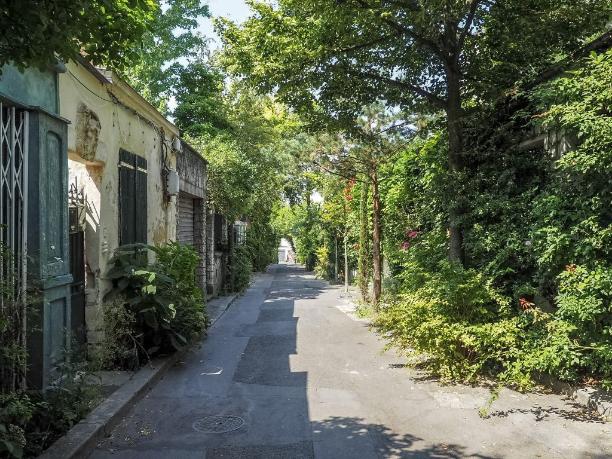 Ménilmontant (etymologically "bad weather house" or "climbing rural domain") is a 13th century old district that was incorporated to Paris around 1860. It is a peaceful place located on a hill east of Paris, which used to be famous for its dance halls and its telegraphs (there is still a metro station Telegraphe to remember it). Today, it is much appreciated for its strong social mix, the concentration of hipster bars and its proximity to Belleville district and the Père Lachaise cemetery. Charles Trenet (1913-2001), aka « le fou volant » ("the singing madman"), discovered the district in the 1930s when he settled in Paris. He obviously was not the only artist to dedicate a song to this Ménilmontant and to maintain a special connection with it. The neighbourhood is indeed intrinsically linked to two other immense figures of French variety, Maurice Chevalier of course, who was born in Ménilmontant and began his career in cafés-cabarets there, and the great Edith Piaf, whose museum is located in the 11th arrondissement, a few meters from Ménilmontant metro station. As for the song "Ménilmontant", it is a joyful American jazz-swing song of the "fleur bleue" genre. It evokes the sweetness of Parisian memories, but also the sadness against a bygone era, as epitomized by the long forgotten Ménilmontant station "where each train passed joyfully", which was operational until 1934. There is today not much left of the station, except the ''Passerelle de la Mare''. However, the good news is that the construction of the future tramway line 8 may result in the reopening of the station. « Mais oui Madame! ». 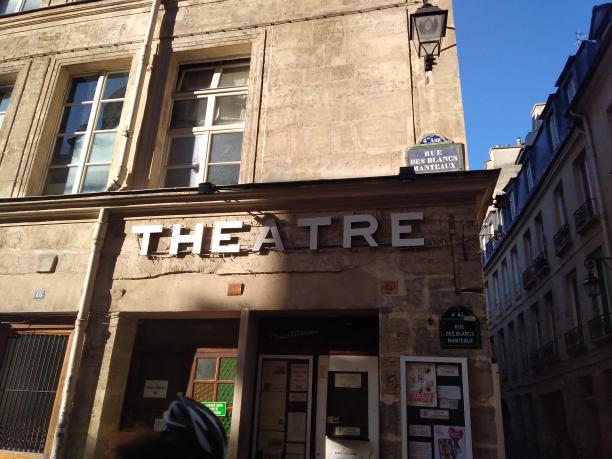 This song was written by the great philosopher Jean-Paul Sartre for his play Huis clos (1944). However, Sartre was unsatisfied with his own lyrics and he decided not to use them at all. A couple of years later, he allowed composer Joseph Kosma to set it to music and to choose a newcomer to sing it. Juliette Gréco was 23 years old at the time and would become the muse of Boris Vian, Miles Davis, Jacques Brel and Serge Gainsbourg, among others ! The song is related to the death penalty, which remained public until 1939 and was widely implemented under the Vichy regime. Sartre also referred to the French Revolution during which "generals, Bishops, admirals... and ladies" were guillotined, although, historically, beheadings took place in Place de la Concorde, Bastille or Château de Vincennes, and not in rue des Blancs-Manteaux. What made this macabre song so special was obviously the author's reputation at the height of Existentialism in France, but also, on the one hand, the contrasts between Juliette's fragility and the ironic gravity of her interpretation and, on the other hand, the dichotomy between a joyful musical style such as a musette and the tragic events that are being narrated. The origin of the street's name comes from the white clothes that the begging monks of the Order of the Servants of Mary used to wear. Today, only the church of Notre-Dame des Blancs-Manteaux has survived and reminds of their presence. I suggest to take a short break there before resuming your visit in the Marais and head to the Pompidou Centre, the Picasso Museum or the Carnavalet Museum. 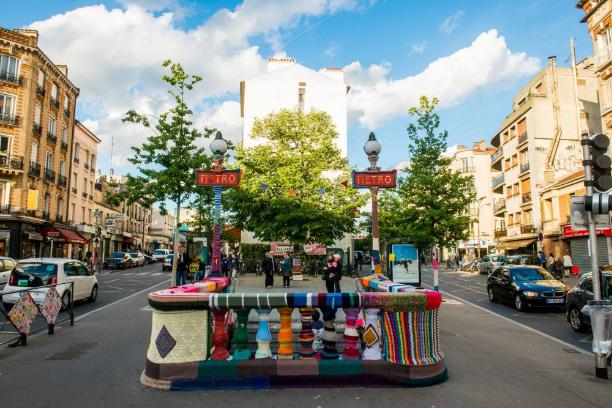 This song was Serge Gainsbourg's first success. It evokes the daily life of a depressed metro agent ("J'en ai marre j'en ai ma claque", which you can translate into - "I'm fed up, I am sick and tired") in the 1950s, when a real person still waited for passengers on the platform to stamp their tickets by making "des petits trous, des petits trous, toujours des petits trous'' (''small holes, small holes, always small holes".) Obviously, this agent worked on today's metro line 11: he traveled in Les Lilas and advised passengers to go to "Arts-et-Métiers direct par Levallois". Beyond its repetitive nature, his job prevented him to enjoy what laid six feet above, i.e. the neo-gothic park of Buttes Chaumont, the bars of Saint-Martin canal and rue d'Oberkampf, theFolie Méricourt Circus and the theatres in Faubourg du Temple. I guess the puncher started despairing outside Les Lilas, for there is nothing special to see up there, unless you plan to buy an apartment, given the area is still relatively cheap compared to the Paris intramuros. Serge Gainsbourg knew the eastern part of Paris perfectly well because he lived there with his parents when he was a child, before he moved to Pigalle near the Museum of Romantic Life, which is the subject of the challenge "Romantic Paris". Gainsbourg's talent consisted in capturing and describing with caustic humour a scene of simple life that you will never have a chance to see, alas: the punchers disappeared in 1973 when the magnetic strip on the back of the card was introduced. 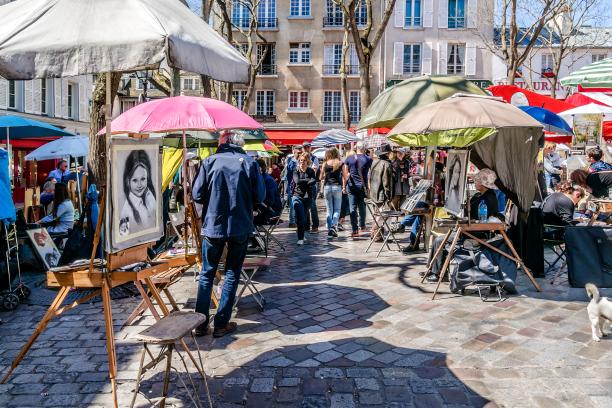 La Bohème is a song about lost youth and probably a lost love, knowing Aznavour's reputation of womanizer. It features the traditional image of the Montmartre district, a place that had been prized by artists since the 19th century (Renoir, Toulouse-Lautrec, Modigliani, Picasso...), and its trivialisation, in the same vein as the Left Bank has experienced since the 1970s. While the name ''Montmartre'' dates back to the Romans, who dedicated a temple to Mars (mons Martis), the Parisian history of Montmartre began when it was annexed by Paris in 1859 like Menilmontant. Today, it is an area with no clear-cut geographical boundaries in the 18th arrondissement that is dominated by the Basilica of the Sacred Heart (1914). It is characterized by narrow and steep streets flanked by long stairs, a special village atmosphere and mythical (and very lively) places such as the Moulin Rouge, the Moulin de la Galette, the Bateau-lavoir, and the cabaret Le Lapin agile. La Bohème is a mythical song. It evokes « un temps que les moins de vingt ans ne peuvent pas connaître » ("a time that the under 20s cannot know"), says Charles Aznavour (1924-2018). Actually, only the 70+ may have had a glimpse of what made Montmartre so special in the first half of the 20th century. Like many other songs (about twenty), ''La Bohême'' deals with classical Parisian topics, namely arts (La Butte à Picasso - Juliette Gréco), pleasure (Place Pigalle - Maurice Chevalier) and love (La complainte de la Butte – performed by artists such as Cora Vaucaire and Rufus Wainwright). To be honest, Aznavour didn't really draw on his memories to compose the song. True, he made his stage debut at the Moulin Rouge thanks to Edith Piaf, but he spent most of his twenties at Rue Monsieur le Prince (see the Challenge ''Royal Paris''), Saint-Germain des prés (see below) and in Quebec (see it after Paris). However, this song is incredibly moving because of the themes it covers, but also because of the talent and the tessitura of voice of Shahnourh Varinag Aznavourian, who gave himself his stage name Charles Aznavour at the early age of 9.

Enough now of miserable stuff. We are here to celebrate. How can we not mention the ''most beautiful avenue in the world'' in a challenge dedicated to the most emblematic places in Paris? The Avenue des Champs-Elysées stretches over 2 kilometers between Place de la Concorde and Place de l'Etoile and it is part of the "Royal Way'', i.e. the line that connects the Louvre, the Arc de Triomphe and the Arche de la Défense. Very few people know about the modest beginning of the Champs-Elysées. Its name (the Underworld in the Greek mythology) appeared around 1694 because of the presence of swamps and of many prostitutes in the vicinity. However, the real start of the Champs is due to Marie de Medici, who decided to build a tree-lined avenue beyond the Tuileries Palace for easthetic and hygienist reasons, and to Louis XIV, who ordered Paris western fortifications to be demolished in order to construct a direct way to Versailles. The reputation of the Champs-Elysées improved after the French Revolution when it became the symbol of the power returned to the people and it experienced a gentrification process in the 1830s and onwards. Private mansions, luxury shops and places for entertainment and culture (summer circus, roundabout theatre) were constructed and irrevocably changed the area. The song (and life) of Joe Dassin, a young thirty-year-old man of growing success from the American bourgeoisie, echoes perfectly the essence of the new Champs-Elysées, that is to say a place to flirt, to do some shopping(''There is everything you want on the Champs-Elysées'') and to enjoy life. It also captures the zeitgeist of the ''Glorious Thirty'', that era of prosperity and freedom that France was experiencing for the first time. 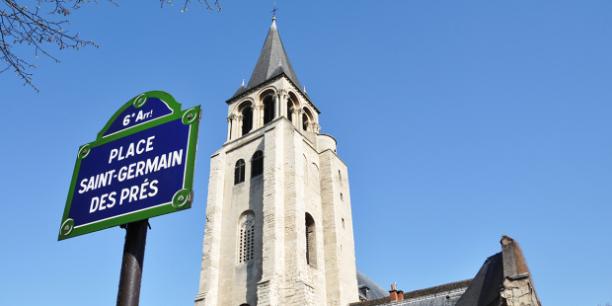 Let's continue with nostalgia and love with the song ''Rive gauche'' written and composed by Alain Souchon. Much less internationally famous than all the above-mentioned artists, Alain Souchon enjoys though a strong popularity in France, thanks to his smash hits in the 1970s (Allo Maman Bobo, J'suis bidon), his artistic friendship with the singer Laurent Voulzy, his well thought-out lyrics and his heteroclyte references. At the turn of the last century, Alain composed a song that was a great success and was dedicated to the Left Bank, a toponym that became a philosophical concept in the 1950s. La Rive Gauche (with capital letters) is intertwined with the mythical Quartier Latin and Saint-Germain des Prés, where French intellectuals (Camus, Simone de Beauvoir) and international musicians (Bechet, Miles Davis) used to live. While Souchon deplored the disappearance of the spirit of the Left Bank (Adieu mon pays), there is no reason for you to be depressed. On the contrary, you are to enjoy an amazing walk through the Left Bank. My must-see? The Church of Saint-Germain des Prés, the Caveau de La Huchette (for jazz aficionados) and the rue des Canettes (for woo-girls and night-birds). What else? 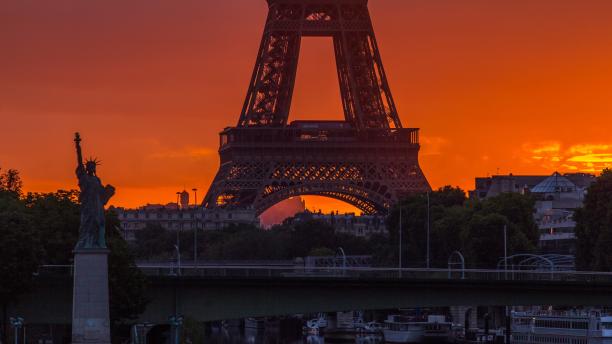 Last but not least, in case your yesterday's evening on the Left Bank was a disaster or if you prefer to avoid the crazy Parisian nights to meditate upon your life, I recommend a walk to the famous Mirabeau Bridge, located in the 15th arrondissement, near the Île aux cygnes (Swan Island), which, by the way, I mentioned in the challenge ''American Paris''. Marc Lavoine is a singer who had his moment of glory in the 1980s and continues to be the fantasy of many French women (god only knows why!). His song is not original, as you can imagine. The lyrics were composed by Guillaume Apollinaire, whose poem would be used dozens of times, by various singers. This melancholic poem deals with a lost love and the passing of time. If time is precious, for what reason did I invite you here, you will ask me? Here is my three-point answer. First, the bridge itself features magnificent allegorical statues. Secondly, the view of Paris from the bridge offers you a new angle for your portfolio dedicated to the Eiffel Tower, and you can observe the horrible Beaugrenelle complex as a bonus. Thirdly, the Pont Mirabeau represents a gateway to the aristocratic part of Paris, i.e. the 16th arrondissement (Paris Saint Germain and Roland Garros stadiums are also there). And, guess who lives in the 16th arrondissement ? Yes, indeed: Marc Lavoine! Congrats! You have completed your musical challenge. If you don't have enough of it, then you should know that two hundred meters from the bridge, in the 16th arrondissement, stands the Maison de la Radio, which offers symphonic concerts with the Radio France orchestra. Otherwise, if your ears are ringing, simply take the barge towards the city centre and relax.